China: Christians lose benefits as crackdown continues ahead of G20

Christians in China are losing their benefit payments in the ongoing crackdown on Christianity, a charity is warning.

China Aid has reported that a local governing body in the central Guizhou province has stopped the welfare support for people who participate in church activities.

A member of one of the affected Miao churches said: "I went back to my hometown and asked my parents about [the welfare payment cancellation].

"They told me that they still hadn't received their welfare.

"[Authorities] only arrested my mother last time, but they cancelled the [welfare] of [both of my parents]. "

The benefit sanctions come at a time when Chinese authorities are increasing the pressure on Christians ahead of a meeting of world leaders next month.

The G20 Summit will be held in Zhejiang province, an area with one of the largest Christian populations in China.

World leaders from 19 countries and the European Union are meeting to discuss the state of the global economy and plan for the future.

China Aid says churches are being closed down and house church events broken up under orders to stop "Christian activities without permission."

The charity is warning that the authorities have been preparing for the meeting as early as February 2016 and have been monitoring hotels, restaurants, churches and temples in the region.

The government says it is taking precautions to avoid risks ahead of the summit, including silencing "folk beliefs" which they say pose a risk, as well as stopping large gatherings held "without approval." 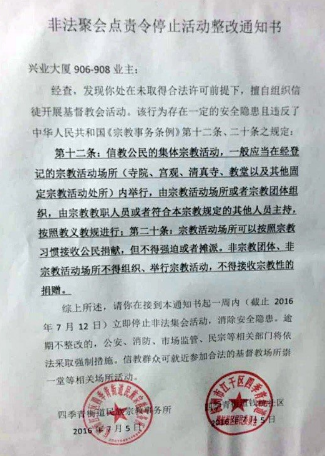 This specifically targets Christian house churches and one church that has been meeting for more than four decades has been forced to disband.

This letter was sent to Little Flock Church: "According to investigations, we discovered that you organized believers to participate in Christian activities arbitrarily without permission.

"Your action violates the Articles 12 and 20 of the Regulations on Religious Affairs and may pose potential danger to the society."

The letter told the church to stop all illegal gatherings.

ARTICLE 20
- Article 20: A site for religious activities may accept donations from citizens in accordance with religious customs, but no means of compulsion or apportionment may be adopted.

The authorities took photos and broke up the service before forbidding the church from meeting again.

A number of house churches in the area have also reported authorities forcing them to halt meetings.