The Catholic Church in the UK wants the Government to speed up the process of housing 20,000 refugees from Syrian in Britain.

Auxiliary Bishop of Southwark, Patrick Lynch, the Church's lead bishop on migration has also urged David Cameron to "extend sanctuary" to others.

It comes a week after the UK said it would resettle 20,000 Syrian refugees over the next five years.

Britain has been under pressure to take in more people as Europe struggles to deal with a huge influx of refugees, with most fleeing conflict in Syria but large numbers also fleeing violence and poverty in Afghanistan, Eritrea and Kosovo. 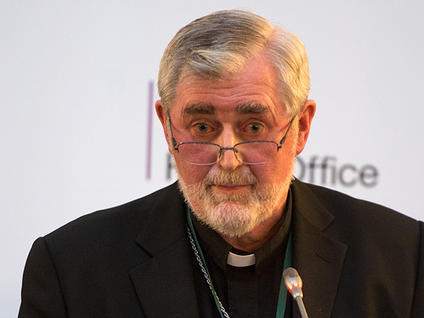 "The Prime Minister's promise to accommodate a further 20,000 refugees is an important part of our national response to the devastating conflict engulfing Syria and the historic numbers of people being forced to flee their homes," said Bishop Lynch.

"I urge the government to prioritise the initial part of its five year timeframe and to provide the essential resources needed, so that these refugees can be received and resettled at the earliest opportunity and the option of extending sanctuary to others explored.

"The scale of this tragedy requires a generous and sustained response from our government and I am confident that this will be supported by the contribution of the Catholic community." added Lynch.

On Tuesday Hungary declared a State of Emergency, with dozens of migrants detained at its border with Serbia.

A razor-wire fence has also been erected preventing thousands of refugees reaching the European Union.

It also paves the way for the deployment of the army to assist police with border patrol pending approval from parliament.

The Catholic Church has criticised the move, suggesting a collective approach by Europe was the only way to tackle the crisis.

What we need is countries across Europe to be realistic about this, to stop up to the challenge, be realistic about their own responsibilities and to all play their part through whether that's supporting camps in the region, welcoming more refugees here, working with other European countries across the continent to play their fair share," added Allmark.

Austria has also warned the country might soon be short of emergency shelters for refugees and migrants streaming in from Hungary.

The Interior Ministry says it only has 20,000 places available, only 300 more than those who need shelter.

It claims 4,000 people had arrived by midday on Tuesday.

Executive Director Stefan Radelich said: "Our mission as Christians is clear when it comes to the 'stranger' or 'outcast', regardless of what motives or assumptions are painted by popular opinion or the media.

"We must be open-hearted, willing to walk a mile in their shoes, and ready to respond with godly compassion to the heart and soul of those suffering."

Listen to Liam Allmark speaking to Premier's Marcus Jones on the News Hour: