The gay rights supporter charged with arson following an explosion outside the Australian Christian Lobby (ACL) office last year has died before his trial.

The Australian Capital Territory (ACT) police released a statement saying the death of Jaden Duong, 36, was being treated as non-suspicious. His lawyer later said his client had died by suicide on Sunday.

Peter Woodhouse told the Guardian that Duong's death highlighted the fact that the ACL arson and property damage case "has always been a mental health issue - and nothing more than that, despite what others would like to assert".

Duong was charged after allegedly driving a rented van containing gas cylinders before blowing them up outside of the ACL's head office in Canberra's northern suburbs, on 21st December, just before 9.30pm.

A vehicle has rammed our office in Canberra & exploded. All staff are safe. I do not know the condition of the driver. Prayers appreciated. pic.twitter.com/R1cKOIfMTC

Duong's hospital records showed he had attempted suicide previously, had chosen to target the ACL spontaneously and had "quit his job to plan this suicide attempt", according to the Herald Sun.

It also stated: "He is 'not a huge fan' of the ACL, or religion in general, due to their beliefs and position on sexuality."

According to documents tendered in court, soon after the explosion, police asked Duong why he had picked the location. 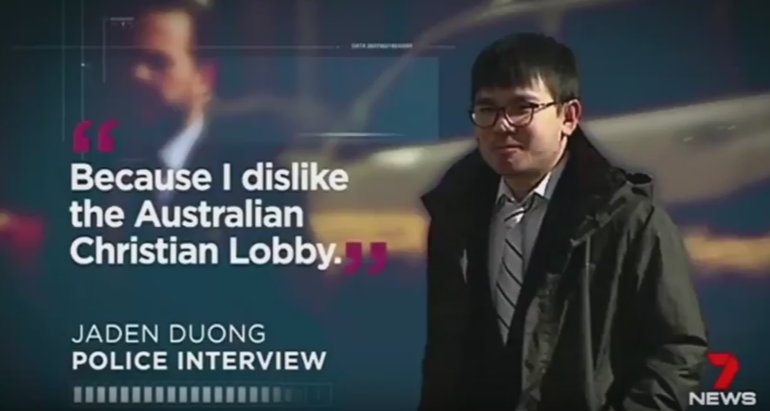 He answered: "Because I dislike the Australian Christian Lobby....because religions are failed."

The police facts also alleged that in the weeks leading up to the fire Duong had Googled search items which included, "how much gas to cause explosion," and "countries with same sex marriage" and "Australian Christian Lobby".

ACT Policing last month published a statement on its website about the case, maintaining police believed the man's primary motivation for the blast had been suicide.

It read: "It is important for police to advise the public when an investigation into a terrorism incident has commenced.

"It is just as important to advise the community where an incident is not believed to be terrorism-related."