Amnesty International says it has proof Islamic State militants are carrying out "a wave of ethnic cleansing" against minorities including Christians.

The charity says it has proof militants carried out several mass killings in August and parts of the country are now "blood-soaked killing fields".

It's accusing I.S. of carrying out war crimes - including mass summary killings and abductions - against ethnic and religious minorities.

In a new report Amnesty outlines it's evidence for the claims including terrifying accounts from survivors of massacres who describe how dozens of men and boys in the Sinjar area were rounded up by Islamic State fighters, bundled into pick-up trucks and taken to the outskirts of villages to be massacred in groups or shot individually. 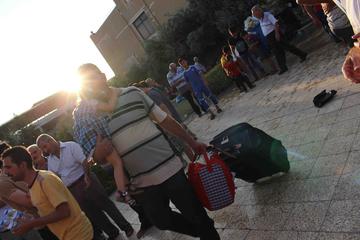 The charity thinks hundreds, possibly thousands, of Christian and other minority women and children have been abducted since Islamic State took control of parts of Iraq.

A survivor of a massacre in the village of Kocho told Amnesty about his experience.

Khider, a 17-year-old student said: "My cousin Ghaleb Elias and I were pushed into the same vehicle. We were next to each other as they lined us up face down on the ground. He was killed. He was the same age as me, and worked as a day labourer, mostly in construction.

"I have no news of what happened to my parents and my four brothers and six sisters. Did they kill them? Did they abduct them? I don't know anything about them.

"After the IS armed men shot us I ran away, stopping to hide when I thought someone might see me or when I could not walk any more. I had to walk many hours to reach Mount Sinjar."

Tens of thousands of Christians have been forced from their homes by I.S. fighters since they started taking over large areas in Iraq.

Amnesty's briefing described the forced displacement of Iraq's ethnic and religious minorities, including some of the region's oldest communities, as a "tragedy of historic proportions", and Amnesty fears that vulnerable communities "risk being wiped off the map of Iraq".

Donatella Rovera, Amnesty International's Senior Crisis Response Adviser currently in northern in Iraq, said: "The Islamic State is carrying out despicable crimes and has transformed rural areas of Sinjar into blood-soaked killing fields in its brutal campaign to obliterate all trace of non- Arabs and non-Sunni Muslims.

"The massacres and abductions being carried out by the Islamic State provide harrowing new evidence that a wave of ethnic cleansing against minorities is sweeping across northern Iraq.

"The people of northern Iraq deserve to live free from persecution without fearing for their lives at every turn. Those ordering, carrying out, or assisting in these war crimes must be apprehended and brought to justice."