Francis blasted the demise of arms control treaties while visiting Nagasaki, the site of the second of the two 1945 US atomic bombings on Japan.

After laying a wreath of flowers and praying at the foot of the memorial to the victims, Francis said the place stands as a stark reminder "of the pain and horror that we human beings are capable of inflicting upon one another".

"Convinced as I am that a world without nuclear weapons is possible and necessary, I ask political leaders not to forget that these weapons cannot protect us from current threats to national and international security," he said.

The mood was sombre and silent, darkened by the downpour that drenched the terraced fields and rice paddies of Nagasaki and the thousands of Japanese who came out in plastic raincoats to witness the second pope to pay his respects to victims of the bomb.

Francis visited Nagasaki, and later Hiroshima, at the start of his three-day trip to Japan aimed at emphasising his call for a global ban on atomic weapons.

Nagasaki was the perfect place to begin his visit, the birthplace of Christianity in Japan and ground zero of the bomb.

The Holy See was among the first countries to sign and ratify the new UN nuclear prohibition treaty, and Francis himself has gone further than any pope before him in saying not only the use, but the mere possession of atomic weapons is "to be condemned".

While Francis did not repeat his 2017 condemnation on Sunday, he made a similar point. 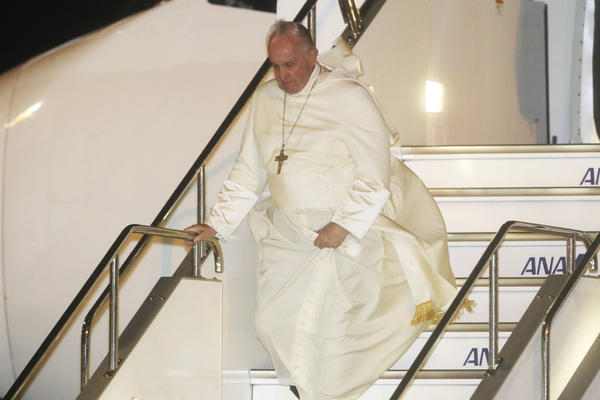 "One of the deepest longings of the human heart is for security, peace and stability," he said.

"The possession of nuclear and other weapons of mass destruction is not the answer to this desire; indeed they seem always to thwart it."

The second one dropped three days later on Nagasaki and killed another 74,000 by the end of the same year.

Many of the survivors have suffered the lasting impact of radiation and developed various forms of cancer.

Under the 1957 government law designed to support A-bomb survivors, or "hibakusha", more than 370,000 people were recognised as eligible for various types of government support, including medical and welfare assistance, depending on how far they were from ground zero.

"In a world where millions of children and families live in inhumane conditions, the money that is squandered and the fortunes made through the manufacture, upgrading, maintenance and sale of ever more destructive weapons, are an affront crying out to heaven," Francis said.

He lamented the "climate of distrust" that is eating away at non-proliferation efforts and the arms control framework, a reference to a series of violated treaties and the demise this year of the Intermediate-range Nuclear Forces treaty, a landmark Cold War-era arms control agreement.

The US formally withdrew from the treaty in August, after accusing Moscow of developing a Russian missile system prohibited under it.

Gerald Powers, director of the Catholic Peacebuilding Network at the University of Notre Dame's Kroc Institute, said Francis did not break any new ground on the morality of deterrence in his Sunday remarks, after he shifted the church's position in 2017.

"Instead, the pope reinforces the church's long-standing efforts to delegitimise the nuclear status quo and convince the world that nuclear disarmament is not only a moral imperative but should be a policy goal," he said in an email.

Starting 1982, St John Paul II had held that nuclear deterrence could be morally acceptable in the interim "so long as it is used as a step toward mutual, verifiable nuclear disarmament". 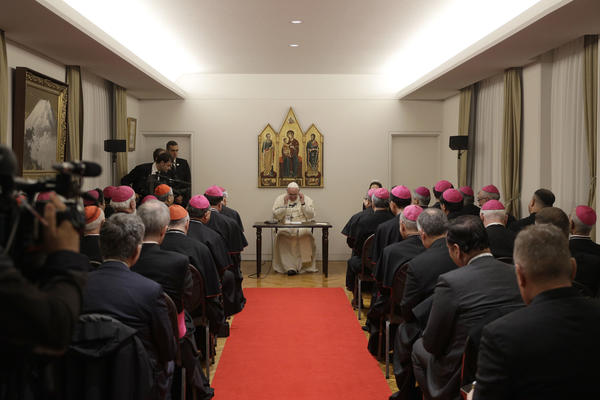 But the Holy See has come to realise in recent years that the policy was becoming a permanent condition, and not leading to disarmament.

Japanese who came out to see Francis were grateful, regardless.

"I think he is a person who can deliver the message of peace without inhibition," said Negoro Fumiyo, a 62-year-old Christian from Osaka who waited for hours in the rain for Francis' Mass, celebrated in Nagasaki's baseball stadium before a crowd of some 35,000 - and the remains of a wooden statue of the Virgin Mary rescued from a cathedral destroyed in the 1945 atomic bomb.

The statue, which was remarkably well preserved despite the blast, was featured on the altar.

Francis' visit to Nagasaki also gave him the chance to honour Christian missionaries and martyrs centuries after St Francis Xavier first brought Christianity to the archipelago in 1549.

He laid a second wreath of flowers at the memorial of 26 Nagasaki Martyrs, who were crucified in 1597 at the start of the two-century wave of anti-Christian persecution by Japanese rulers.

The example of the missionaries and martyrs, and the Hidden Christians who kept their faith alive underground for generations, helped inspire a young priest named Jorge Mario Bergoglio to be a missionary in Japan.

"May we never forget their heroic sacrifice!" Francis said in remarks at the memorial.

Shingo Fukaura, from the Goto Islands off Nagasaki, where the Hidden Christians survived during the time of persecution, travelled to Nagasaki bearing gifts he hoped to give the pope at mass.

"I also brought this branch of the camelia tree, which has been on my island since the time when we, Christians, were hiding our faith," he said.

"I am hoping he could give his blessing to this tree ... and I could take it back to the islands to make it a symbol of peace."