Pope Francis has apologised to the Roma ethnic minority for their history of discrimination in Europe.

The pontiff also paid homage to Romanian Catholics persecuted during communist rule as he wrapped up the third and final day of his visit to the country with a message of forgiveness.

Francis reached out to the minorities of Transylvania during the deeply symbolic visit about 20 years after St John Paul II made the first papal trip to the majority Orthodox country.

In his final stop before heading back to the Vatican, Francis visited a community of Roma, also known as Gypsies, in a newly built Catholic church that was so small organisers asked the clergy to leave to make more room for Gypsy families to get in.

There, Francis apologised for the "many experiences of discrimination, segregation and mistreatment experienced by your communities", a reference to the second-class status of the Roma minority in Romania and throughout Europe, where Roma are more likely to be poor, uneducated and at risk of harassment, according to European Union studies.

Francis recently met members of Roma communities in the diaspora at the Vatican and knows well the hardships they face.

"History tells us that Christians too, including Catholics, are not strangers to such evil," Francis said, in an apparent reference to World War Two-era deportation of Roma along with Romanian Jews that is commemorated by a Holocaust memorial in Bucharest.

"I would like to ask your forgiveness for this," Francis said. "I ask forgiveness - in the name of the Church and of the Lord - and I ask forgiveness of you. For all those times in history when we have discriminated, mistreated or looked askance at you ... and were unable to acknowledge you, to value you and to defend you in your uniqueness." 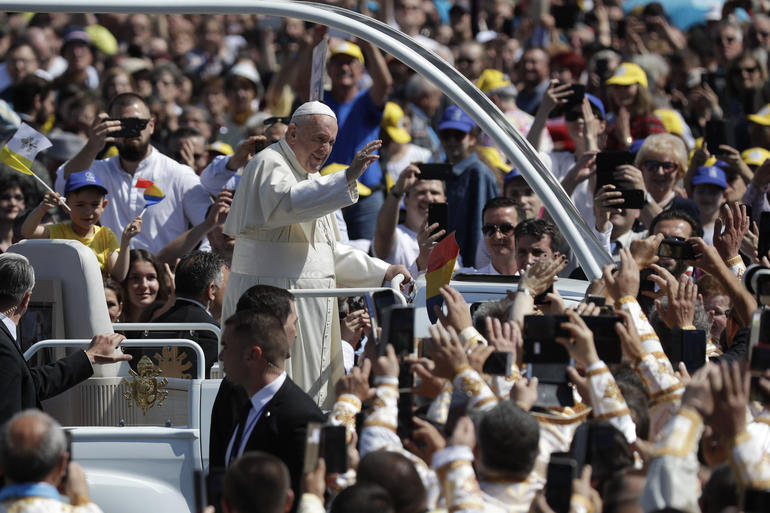 Francis has made it a point to use his trips and meetings with foreign leaders to ask forgiveness for past injustices, just as John Paul did.

He apologised to indigenous peoples for the colonial-era conquest of the Americas while in Bolivia and during a Vatican meeting with the president of Rwanda, apologised for the failures of Catholics in the Rwandan genocide.

Roma are often among the poorest and least educated citizens in Central Europe.

Neighbouring Hungary, for example, has been warned by the EU about the discrimination of Roma children in education.

The EU Agency for Fundamental Rights reported last year that 80% of the Roma population in Europe is at risk of poverty, and that hate-motivated crime and harassment were preventing their inclusion in society.

Francis began the day by beatifying seven Greek-Catholic bishop martyrs in Blaj, a stronghold of the Greek-Catholic Church that was outlawed during communism. The seven bishops had been arrested and imprisoned between 1950 and 1970 for adhering to their faith.

Francis held them up as models for the Romanian faithful today, saying they "gave their lives to oppose an illiberal ideological system".

"These lands know well how greatly people suffer when an ideology or a regime takes over, setting itself up as a rule for the very life and faith of people, diminishing and even eliminating their ability to make decisions, their freedom and their room for creativity," he said.

He warned that new ideologies were threatening Romanian families today - an apparent reference to gender issues, gay marriage and other secular trends that Francis has previously blasted as Western "ideological colonisation" over others.