Nick Clegg: Having faith must be the most wonderful thing

In an exclusive extended interview, Nick Clegg has told Premier he thinks it must be the most wonderful thing to have a faith and would embrace it if it came hi

The Deputy Prime Minister has been speaking ahead of the election and touched upon his personal faith journey, his time in the coalition government and the role of Church in society and politics.

Mr Clegg, who's been labelled an atheist in the media, said he felt uncomfortable with the title and remains open to religion.

"I now accompany Miriam [his wife] and the children, and do so with great joy, to Mass pretty much every weekend," he explained.

"I sometimes think it must be the most wonderful thing to be infused with faith. It's not something that's happened to me, it's not happened to me yet. I would embrace it.

"Labels get attached to you, but I've never had much time for vociferous secularism. I'm always a bit sceptical of anyone who acts with raging certainty about anything.

"I still question about one's spiritual life. I believe we are spiritual beings as well as physical beings and I hope I'll continue to search and think about and grapple with that until my dying day." 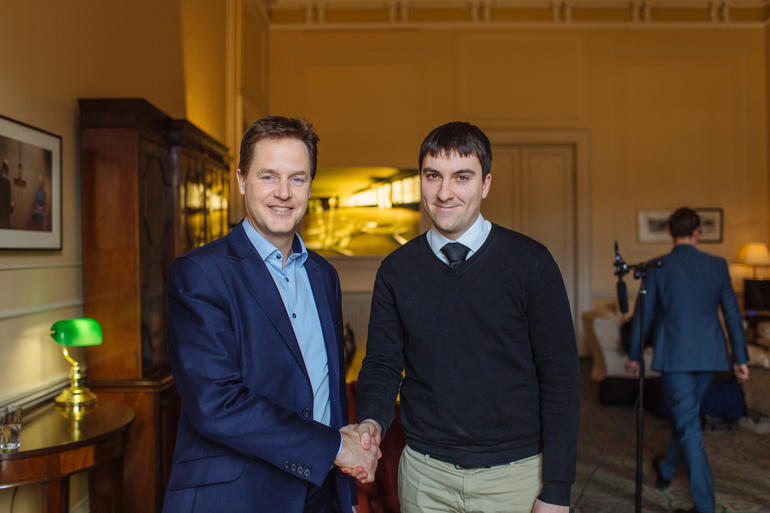 The 48-year-old father of three spoke about the Christian values he wants the UK to be based upon. He said: "I want my kids to grow up in a country where people are treated fairly; where the vulnerable are looked after and not abandoned.

"Where we don't walk on the other side of the street when we see people less fortunate than ourselves; that we make it our business to reach out and help them."

The Liberal Democrat leader also welcomed the interventions of the Church of England and the Catholic Church ahead of the General Election, stating that anyone who believes in fairness should speak out in favour of it: "I don't agree with some of the assertions made...but I think it would be almost odd for the Churches not to speak out from the premise of the values and principals and worldview that people of faith in those Churches hold."

Addressing the situation of persecution across the Middle East, Mr Clegg said the works of Islamic State were 'distressing' and 'grotesque' but explained the reasons why the Government won't appoint a religious freedom ambassador to speak up for those who are persecuted for their faith.

"I've looked at it and would be more than happy to endorse that in a millisecond if it was shown to be something that would make a dramatic difference," he said

"I think the concern expressed to me from the Foreign Office, was that there is some evidence, where other countries have done this, that precisely the countries that you want to address and speak to about their attitude on religious freedom just simply slam the door shut to the individual who's given that particular role or label."

Speaking about his future in politics, he said he would be comfortable entering into another coalition but doesn't want the Liberal Democrats to be seen as the party that tries to get its foot in the door in Whitehall from one parliament to the next.

He said if the British public decides not to give one party a majority he would work for the good of the country even if it means people turn away from his party. However he confirmed he wouldn't work with UKIP or the SNP because of the issues of Europe and keeping the United Kingdom together.

Asked whether he expects to still be Deputy Prime Minister after 7 May, he replied: "It's entirely for the British people to decide.

"I'm immensely proud of what my team and my party have achieved."

Listen to the full interview with Premier's Marcus Jones here: