Court of Appeal judges are set to rule on a challenge against a ban on demonstrations outside a west London abortion clinic.

Ealing Council became the first in the country to create a protest-free "buffer zone" outside a Marie Stopes clinic in April 2018 following demonstrations.

Christian mother, 35-year-old Alina Dulgheriu, and Andrea Orthova, who regularly attend a vigil run by the Good Counsel Network (GCN), mounted a legal challenge at the Court of Appeal in a bid to overturn the ban on protests directly outside the clinic.

At a hearing in London in July, their lawyers argued the ban interferes with their rights under the European Convention on Human Rights to freedom of expression, freedom of religion or belief and freedom of assembly and association.

They also said the council was wrong to use a PSPO because the orders were designed to protect local residents from anti-social behaviour, and clinic users were "one-off or occasional" visitors to the area.

The Master of the Rolls Sir Terence Etherton and two other senior judges will give their decision on the case on Wednesday.

Lawyers for the two women previously told the court the PSPO "criminalises acts of prayer" and said it was the "first time since the reign of Elizabeth I that public prayer has been subject to potential criminal sanction".

Their barrister Philip Havers QC said GCN has operated vigils outside the centre for a number of years and has done so daily since 2013, usually with one counsellor near the gate and "one or two people praying nearby".

He said many of the allegations made against protesters in evidence gathered by the council during a consultation exercise were "strongly disputed" by the women, GCN and other anti-abortion groups.

He added: "In addition, GCN provided evidence to the (council) demonstrating that its counsellors had assisted over 3,000 women in its history.

"These women included Ms Dulgheriu. Several other women also testified that they had decided not to have abortions as a direct result of GCN's presence outside the clinic and, further, that they would not have known about the help being offered had they not been approached by counsellors."

Dulgheriu says she was offered "financial, practical and moral help", as well as accommodation, and now has a "beautiful" daughter. 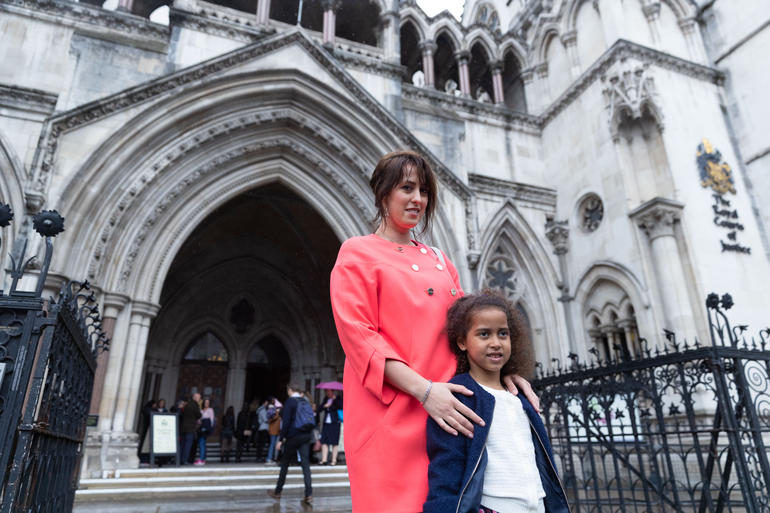 Alina with her daughter Sarah

Lawyers representing Ealing Council argued the buffer zone should remain and said some users of the clinic who had abortions many years ago are still "significantly affected by their encounters with the activists".

Ranjit Bhose QC said the council received a petition signed by more than 3,500 people urging it to take action.

He also said more than 1,000 people who responded to the council's consultation provided specific comments about witnessing activists approaching clinic users and "perceiving this behaviour to be clearly intimidating, harassing or shaming" to those users.

He added: "The consultation report also included direct quotations from a number of residents about the effect of passing activists with their own young children and being confronted by graphic images of foetuses laid out upon the grass verges.

"There was, on any account, a very substantial body of evidence before the (council) decision-maker, which included compelling statements from service users, local residents and those frequenting the area, which delved into detail on the impugned activities and their detrimental effect."

The barrister said these included allegations that women going to the clinic had been called "mum" and had pink or blue rosary beads handed to them.

There were also reports of signs and images which caused distress, including images of "developing and aborted foetuses" and signs which read "thou shall not kill" or "abortion kills babies", he told the court.

Human rights organisation Liberty intervened in the case, arguing that the "right to peaceful protest" must be protected and highlighting its concerns about the "over-broad nature" of the PSPO.

Dismissing a High Court challenge against the PSPO brought by the two women in July 2018, Mr Justice Turner said the council's restrictions on protests were "justified".

The judge said there was "substantial evidence" from clinic users that their privacy was being "very seriously invaded at a time and place when they were most vulnerable and sensitive to uninvited attention".

He also said his ruling did not give the "green light" to local authorities to impose PSPOs around all abortion clinics and each case must be decided on its own facts.