Singer, Goulding was greeted by Archbishop of York Dr John Sentamu, who led her into the minster.

Goulding, who was flanked by five bridesmaids and two flower girls, had arrived some 25 minutes late to the service.

Newlywed Ellie Goulding and her husband Caspar Jopling have shared a kiss on the steps of York Minster - moments after marrying in front of a star-studded congregation.

The chart-topper wore a traditional bespoke wedding gown with a veil and train designed by Natacha Ramsay-Levi for Chloe, while Mr Jopling opted for a suit from Savile Row tailors Huntsman.

The pair exited the minster after tying the knot, pausing on the steps to kiss before descending amongst a crowd of friends and family. 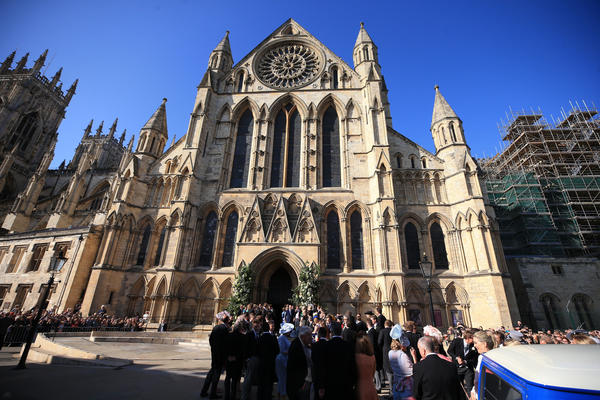 The 32-year-old Brit Award winner and her husband then left in the same blue Volkswagen campervan that delivered them to the service on Saturday afternoon.

Singer Katy Perry arrived with her Hollywood star boyfriend Orlando Bloom, who was in London earlier this week to promote his new Amazon series with Cara Delevingne, Carnival Row.

Princesses Eugenie and Beatrice arrived with their mother Sarah, Duchess of York and were greeted by Eugenie's husband Jack Brooksbank - who was one of the groomsmen.

The groom, 27, gave a thumbs-up to waiting guests on his arrival.

He was cheered by the crowds and greeted with an announcement by York's town crier.

Several hundred people had gathered outside the south door of the minster waiting for the bride and any celebrity arrivals.

After a heavy shower soaked everyone waiting, there were cheers as the sun broke through the clouds.

The crowds also cheered and waved as the first coach-load of guests arrived.

Goulding performed at the Duke and Duchess of Cambridge's wedding party in 2011 and, with her fiancé, was a guest at Princess Eugenie's marriage last October.

The singer and Mr Jopling have been together for more than two years and announced their engagement with a formal notice in The Times a year ago.

Normally a couple must have a "connection" to York Minster and apply for a special licence to marry there. A spokesperson for the cathedral said the couple had "fulfilled" the qualifying criteria.

Watch as Ellie Goulding arrives beautifully at her wedding! pic.twitter.com/glGWgPkXuY