Thursday is the first UN day for remembering victims of violence due to their religion.

The UN day for commemorating those who are victims of violence due to religion or belief started as just an idea in Ewelina Ochab's head - a legal researcher, writer for Forbes and Roman Catholic (pictured above, far left).

Having worked on religious freedom and human rights for nearly four years, she wondered whether it might be helpful to victims and survivors and charities that work with them if there was a day that was recognised worldwide where religious persecution was acknowledged.

"I was always very impressed with how the UN states and civil society mark one of the days focused on acts of violence against women and girls and I wanted to create something similar."

"It required a lot of work. The first step I took was to approach a number of NGOs...I wanted to hear from them whether they would appreciate having such a day, whether this would help in their work and be appreciated by survivors of such atrocities."

After hearing positive feedback from aid charities and lobby groups about the idea, she took it forward.

"It's not only up to the NGOs whether they want to have such a day. To establish such a day, we needed to have states who were willing to support it, who were willing to table it at the UN. So, that was the second step - to approach states to get their support and to approach parliamentarians as well, who could then encourage governments to support it. There was a lot of work involved."

Ewelina explained how she was looking into how the subject could get more focus and action for survivors of religious atrocities and how to apply preventative measures against future violence.

"It started with me, but then, of course spread across NGOs, spread across states. At the time when Poland was proposing it and tabling the resolution at the UN, we already had great support from civil society and from states who we knew that, once it's at the UN, they will support it."

As the British parliament is in recess on 22nd August, the day was marked by politicians in the UK on 23rd July in the Houses of Parliament, with MPs Jim Shannon, Rushanara Ali, Fiona Bruce and peers Baroness Berridge, Lord Alton and Lord Ahmad - the government's special envoy for freedom of religion and belief - all attending.

Poland also hosted an event at the UN in Geneva, for which Ms Ochab was a panellist, on the topic and on the day itself there will be another event held at the UN building in New York by the UK and Poland on protecting and assisting religious minorities in conflicts.

For the International Day Commemorating the Victims of Acts of Violence Based on Religion or Belief (August 22) we have a message for you. #EndReligiousPersecution#UNIDVRBV#FoRBMatters#Respect4ReligiousFreedom@iclrsorg@Baroness_Nichol@APPGFoRB@NazilaGhanea@juanmartinvivespic.twitter.com/KvirgVEt6t

Ms Ochab explained how one of her motivations was the scale of recent killings of religious people by IS and the Burmese military.

"We know from many reports that persecution against Christians - and general religious persecution - has increased and I think I would like to start with two most severe examples of religious persecution, two cases of genocide that occurred in the last five years only, which is incredible - to talk about two genocides in the last five years - and that's the genocide committed by Daesh against Christians and Yazidis and other religious minorities in Syria and Iraq and another case of genocide from Myanmar, or Burma, perpetrated by the Burmese military against Rohinga Muslims.

"Of course, when we talk about genocide, we need to remember that it differs from any other mass atrocities, because in the case of genocide, we have this specific intent to destroy a protected group, in whole or in part. So, I think it's just incredible to imagine that in the last five years, we had two cases where the perpetrator intended to destroy the protected religious groups in whole or in part.

"This is something that we should not be witnessing in the 21st century, not after what happened with the Nazi atrocities, not after Bosnia, not after Rwanda, we have to do better, we must do better to address the atrocities and to ensure that we don't talk about case of genocide in the future.

"In both cases in Iraq, Syria and in Burma, we failed to prevent those atrocities and hence, we are talking about them as the most extreme examples of religious persecution the 21st century." 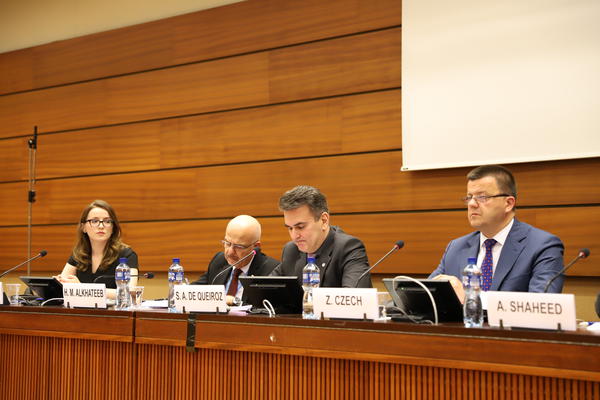