Gearing up to meet the pontiff in the Vatican, non-believer Amos was prepared to challenge the head of the Catholic Church over its doctrines.

Amos grew up in a believing household but has never felt the need for organised faith, which made him feel like he did not belong either in a religious community, or in a potential afterlife.

The stand-up star was given an audience with Francis and braced himself for dismissive answers from the papal leader, who he believes is a progressive exception to the religious rule.

But Amos has said his meeting with Francis was life-changing and has given him "faith in human beings".

Francis told Amos that all humans have dignity and too much attention is paid to defining adjectives such as "gay".

The comedian said the words of tolerance from the pontiff during his secular epiphany provide a lesson for millions, and bring about a greater religious acceptance of homosexuality.

He met the religious leader as part of the BBC series Pilgrimage: The Road To Rome, which follows a group of UK celebrities travelling an ancient route from Canterbury to the seat of the Catholic Church.

Amos told the Press Association: "If he had said, to my face, 'you're not going to be accepted into the promised land' et cetera, I would not have sat there and just gone 'thanks for that', and walked away.

"I was absolutely on the back foot. I know what I think he's going to say, and if he had said that, I would have absolutely challenged him."

Amos was instead told that he was not being judged, and common humanity is more important than differences in sexuality.

The comedian said that moment, which left him in tears, changed his life and took away the burden of certain religious questions he had struggled with.

He said: "It was life-changing. It's given me faith in human beings. It's opened my eyes about not judging religious people based on my own negative experiences.

"I was carrying around a lot of grief. In a weird way it did alleviate some of that sadness.

"When I left that meeting there was joy in my heart.

"I had lost a couple of people who were very close to me who were particularly religious.

"Lots of things come into your mind, like 'is there an afterlife? Will I see you again? In a weird way, he took that off my shoulders.

"I don't know if I will see these people again, but he has told me the door is open." 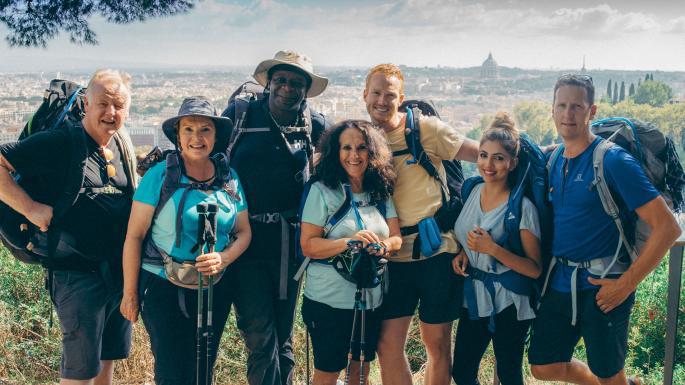 Amos believes that the burden has not only been taken off him, although he remains non-religious, but potentially of millions of homosexual believers worldwide.

He said: "It was very important for me to hear, from the big man, as far as many people are concerned, with direct access to the man upstairs.

"The impact of those words, to other people around the world, is going to be huge.

"You don't feel like you belong. And there's guilt that people carry with them, and strain.

"For him to get there first, and acknowledge my existence as a human being, and not judge me, that in itself speaks volumes to many millions of people - gay, lesbian, bisexual, transgender - all around the world."

Amos said that if other religious leaders adopt a similar tolerance, there is room for faith in secular society.

He described his experience as: "Life-affirming. It was just incredible, and I'll never forget it."

Pilgrimage: The Road To Rome airs on 19th April at 9pm on BBC Two.