Dancing and singing at Vatican mass as Pope welcomes Congolese

The whoops of joy from the Congolese approaching the altar with symbolic gifts made for a vivid contrast with the solemnity of most religious ceremonies at the Vatican basilica.

Francis decided to celebrate the Mass to mark the 25th anniversary of the founding of the Catholic Congolese Community in Rome.

The Mass was conducted using a special rite approved by the Vatican in 1988 entitled the "Congolese Missal for the dioceses of Zaire," the former name of DR Congo.

The Vatican noted that Popes Paul VI and John Paul II had encouraged, as the Vatican put it, "opening the liturgy to the cultural values of the people" of DR Congo.

In his homily, Francis prayed that conflict cease, noting that peace was "gravely threatened in the east of the country". He decried weapon suppliers, lamenting "conflicts fed by those enriching themselves with arms".

Francis noted that many in the pews on Sunday had left their homes and loved ones to come to Italy in search of a better life. In an apparent reference to hostility by many Italians to arriving refugees and migrants, the pope said: "The church is the house of God. Here, then, always feel at home."

Francis's expressed desires to visit DR Congo as well as South Sudan have so far been thwarted by persistent violence in those countries. He recently said he hoped to visit South Sudan in 2020 if conditions permit a pilgrimage. 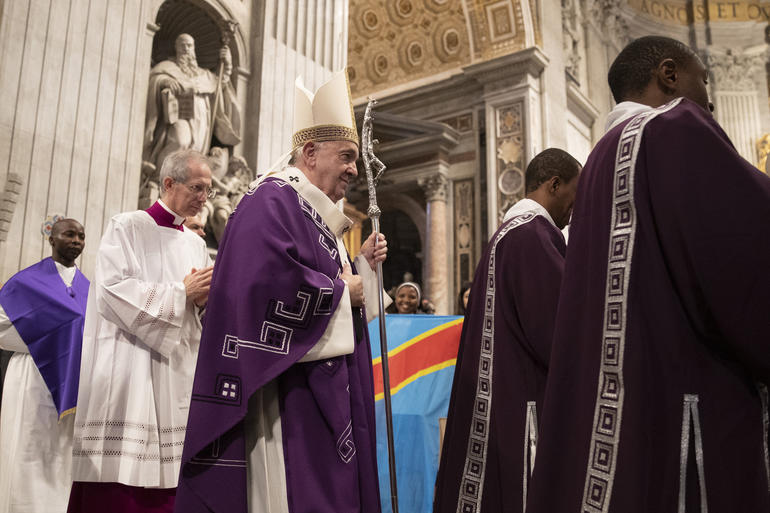 At the end of the Mass, a Congolese nun, Sister Rita Mboshu Kongo praised Francis for showing "fatherly attention and a great openness for the churches that are on the peripheries" and for his "constant worry" about migrants, the poor and others on society's margins.

The nun decried what she called "total silence on the global level" to the killings of some six million Congolese people in the last 20 years" in conflict and turmoil.

Some of the Congolese faithful in the basilica "don't know where their relatives are, don't know if they are alive or dead," Sister Mboshu Kongo told the pope.