A Church of Scotland minister has revealed that he used to sleep just yards away from the Berlin Wall which dramatically fell 30 years ago on Saturday.

Former soldier Rev Peter Sutton spent four months patrolling the guarded concrete barrier that physically and ideologically divided the German city and cut it off from the rest of East Germany from 1961 to 1989.

The minister of St Cuthbert's Parish Church in Edinburgh was a platoon commander with the 1st Battalion Black Watch.

He was responsible for 30 men whose job it was to protect the British sector of Berlin up until just a few months before the wall was torn down.

Ironically, Rev Sutton, 54, was on UK soil in a heavily fortified army patrol base surrounded by "huge breeze block walls" when he, along with his platoon sergeant, watched one of the most historic and public demonstrations of unity unfold on television.

He said: "I really enjoyed my tour in West Berlin because it was an exciting, vibrant place to be.

"Our role was to ensure that the Russians did not take over the city and make it part of East Germany.

"It was a city full of 'spies' and an exciting posting everyone wanted because historically it linked you back to all those War Films and Commando Comics we had grown up with.

"I was stationed there until a few months before the wall fell and although Berlin did not feel dangerous per se, people were still being shot if they came over it.

"You would not climb over it for a joke." 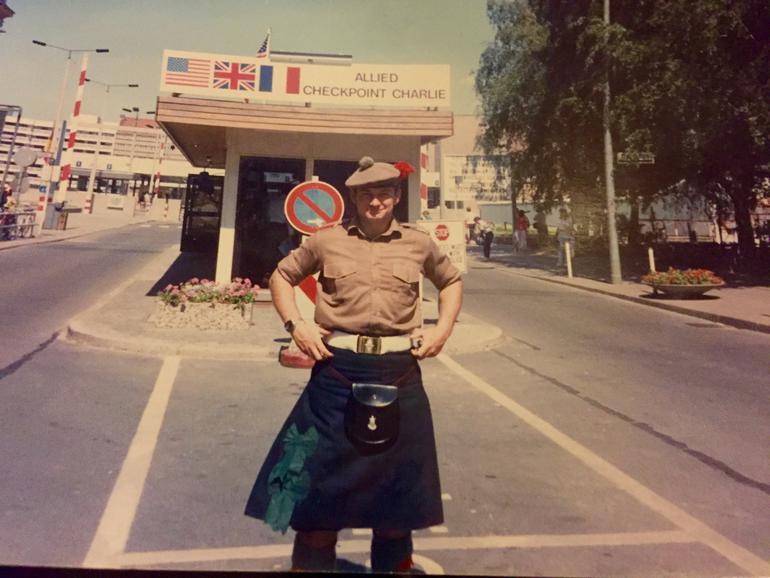 Rev Sutton said the wall ran behind the base where he was stationed and one barrack in the compound could not be used by the British because it was technically in the Russian sector of the city.

"Visitors would stay in the officers mess and we would go to the wall with them and chip off a bit of it for them to keep as a souvenir," he added.

"It was a different world with a different mind-set and was like going back in time by 30 years," he recalled.

"It was grey and drab, nothing really had been repaired and you came back with a splitting headache because of all the fumes from the fuel used in Trabant cars.

"I speak a little German and I remember one time when I was in my uniform a little girl pointed at my kilt and asked her mother 'why is that man wearing a skirt?'

"She couldn't explain because she did not know what Scotland was or anything about our national dress.

"It was not part of how they were educated."

The minister said a Russian officer he met gave him an inkling something significant was about to happen just before he left.

"There was a British military train that connected Berlin to West Germany and travelled through the iron corridor and my job as train officer was to present passports for inspection," he recalled.

"I was chatting with the inspecting Russian officer and asked him if he thought we would be doing this in 20 years' time and he said 'I think there are about to be big changes' and a couple of months later the wall came down."

Rev Sutton said his platoon had moved to South Armagh in Northern Ireland by then and he and his men watched the coverage on television in a heavily fortified base.

"It was a great moment of celebration but quite poignant and we sat there and thought, if they can tear down barriers in Europe, what on earth is going on in Northern Ireland where communities are divided and we are surrounded by huge breeze block walls and in constant danger?" he said.

Rev Sutton recalled the special moment when the wall fell, but fears the UK is now heading to a time signifying division.

"Watching it come down was a joyful moment and historically, if you were to follow the pattern of the Cold War it should have ended in mutually assured destruction.

"People realised that was not the way to go and it was much better to tear down barriers and make it open and possible for people to engage and travel amongst each other.

"But here we are on the cusp of leaving the European Union and I think barriers are being built again which is very sad, particularly in the case of Northern Ireland which has paid a heavy price for peace and reconciliation.

"For today's political class, which on the whole never really got involved in the Cold War or the Troubles in Northern Ireland, to put that in jeopardy for their own ends is incredibly disingenuous and disrespectful."