'He was just a great Christian': Youth pastor, 29, drowns in tragic lake accident

A church congregation is in mourning after the death of their youth pastor in a tragic drowning accident. Lance “Chris” Jenkins and two of his friends were swept off a pier into the freezing waters of Lake Michigan on Sunday night after heading to the lake following their evening worship service.

According to reports, large 12-foot waves suddenly engulfed the jetty, sweeping Jenkins and two others off their feet and into the icy waters. The 29-year-old church worker was seen clinging to rocks nearby before disappearing into the water. His body was discovered two days later.

The two others who fell into the water with Jenkins survived the incident, while eight firefighters involved in the subsequent rescue operation got into difficulty themselves as they attempted to save the stricken pastor.

According to a statement from a local firefighters union, several of the emergency personnel suffered injuries as they battled with the brutal conditions.

“The victim was observed in the rocks and rescue efforts were initiated. E24 made multiple attempts to reach the victim. During this attempt, a firefighter was swept off the pier,” the union said. “The injured crew member self-rescued and the team reorganized for a second attempt led by arriving mutual aid from Norton Shores Fire Department E421. E421s crew made valiant efforts to reach the victim, but they, too, sustained injuries after being swept off the pier twice.”

Due to severe gale force winds, the union said that "rescue by air was also found to be impossible", adding that "another land rescue attempt was made" which resulted in a crew of five being "swept into the water" - one of the firefighters was seriously injured in the rescue.

Members of Broadway Baptist Church in Muskegon remember Chris as a committed Christian and loving husband. "We were all just devastated,"  parishioner Jeff Cooke told Michigan Live. "It’s just such a shock. He was just a great Christian." 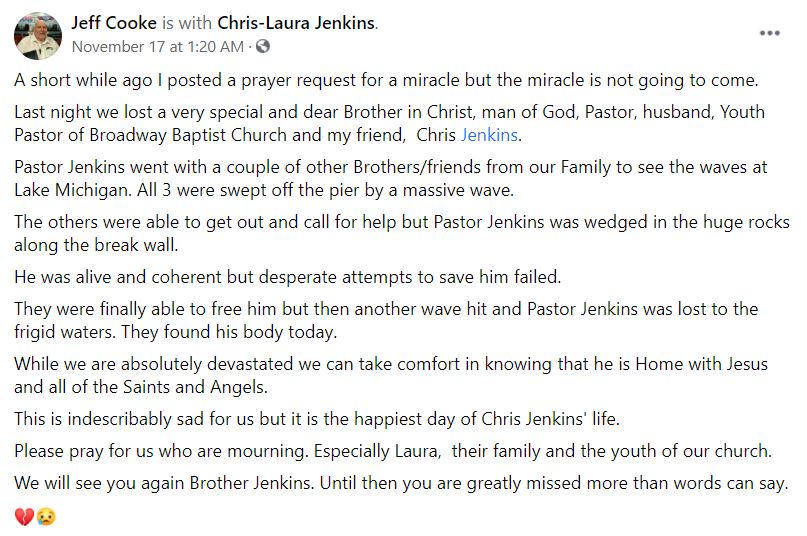 An online obituary for the youth pastor paid tribute a man unwavering in his commitment to family and faith.

"He gave his heart to every one of the teens he worked with. His dedication to bringing himself and others closer to the Lord was evident to all who knew him," it read.

Continue the conversation on our Facebook page
Article by Will Maule