In a small distillery just outside Bethlehem in the Israeli-occupied West Bank, a clear liquid drips out of a copper pot still into a stainless steel barrel, ringing like church bells.

Every year with the start of Advent, which arrives shortly after the end of the grape harvest, Nader Muaddi prepares a new batch of arak, an anise-flavoured spirit.

The drink, which turns milky white when mixed with water and ice, pairs perfectly with Levantine cuisine, particularly mezze and grilled meats.

"Arak is used to bring people together around a meal, to share conversation, to strengthen relationships, and that's what we do around the holiday season," Muaddi said. "So, it's not only the spirit of Palestine, it's our Christmas spirit." 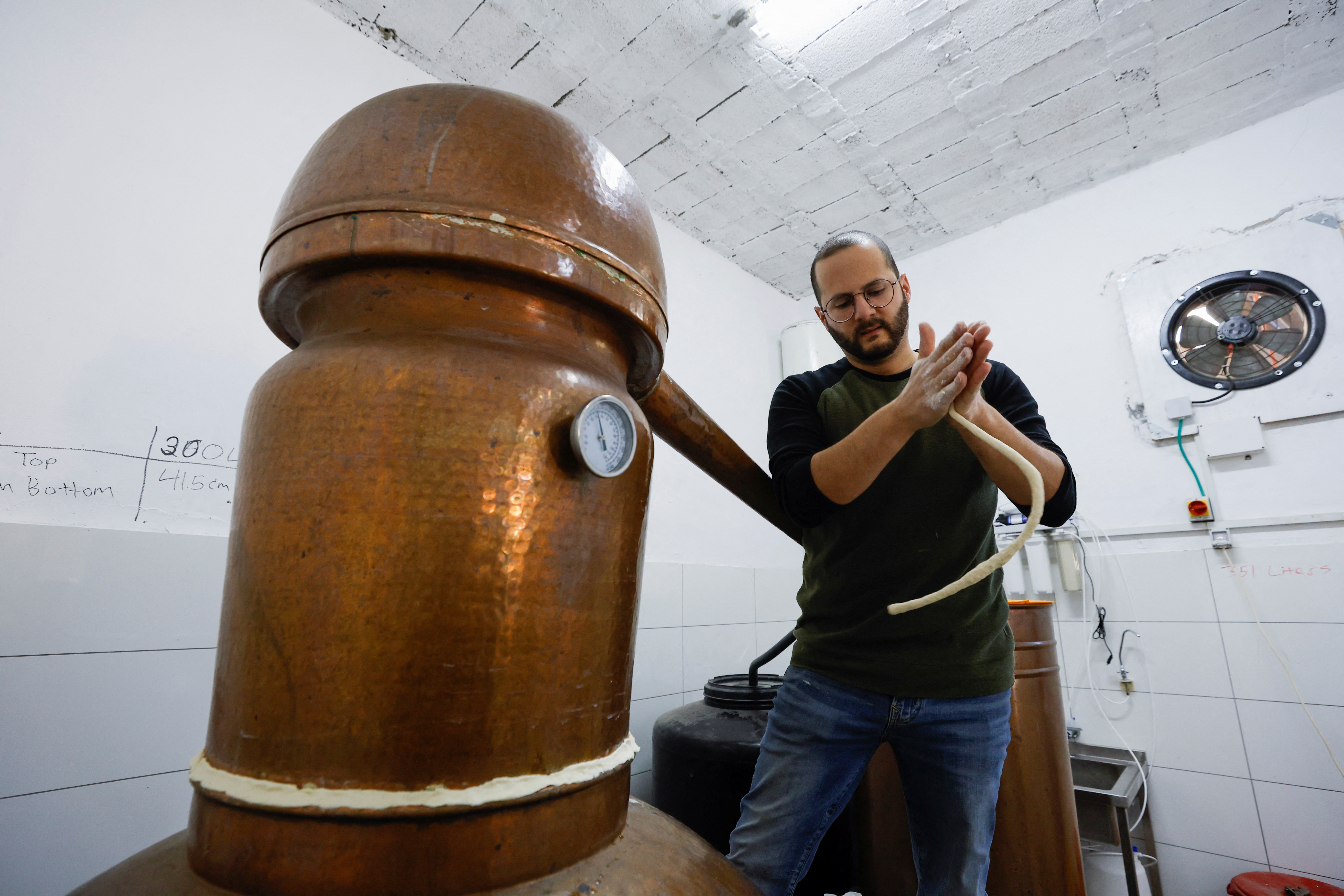 Arak was first produced in Iraq more than a thousand years ago and is considered the oldest distilled spirit. Historically, families across the Levant produced their own wine and arak, which they would share with guests visiting during Christmas.

Christians make up a small fraction of the Palestinian population in the West Bank, Gaza and East Jerusalem. Many live in Bethlehem, the traditional birthplace of Jesus, and its immediate surroundings.

Making arak was a way to repurpose leftover wine before it turned into vinegar, said Muaddi. While that tradition has largely continued in neighbouring countries like Lebanon and Syria, he said, it ended for Palestinians when home distilling became prohibited under British and then Jordanian rule.

According to Muaddi, licensed arak factories eventually gave up on the distillation process entirely in an effort to reduce costs and increase profits, compromising its quality.

"When the quality of arak went down, people deserted it," he said. Among Palestinians, it developed a bad reputation as "a drink for drunkards".

But for Muaddi, who grew up in the United States among Arab diaspora communities, arak was at the center of every feast and fete. "It's the drink of companionship," he said.

When he returned to the West Bank in 2007, he was spending so much on purchasing high-quality arak from Syria and Lebanon, a friend quipped that he should consider making his own – a challenge he took on in 2010.

He read books, joined online forums, watched YouTube tutorials and kept experimenting until perfecting the recipe. When friends and neighbours voiced interest in buying his arak, Muaddi, who works full time at an international humanitarian organization, decided to turn his hobby into a side business. 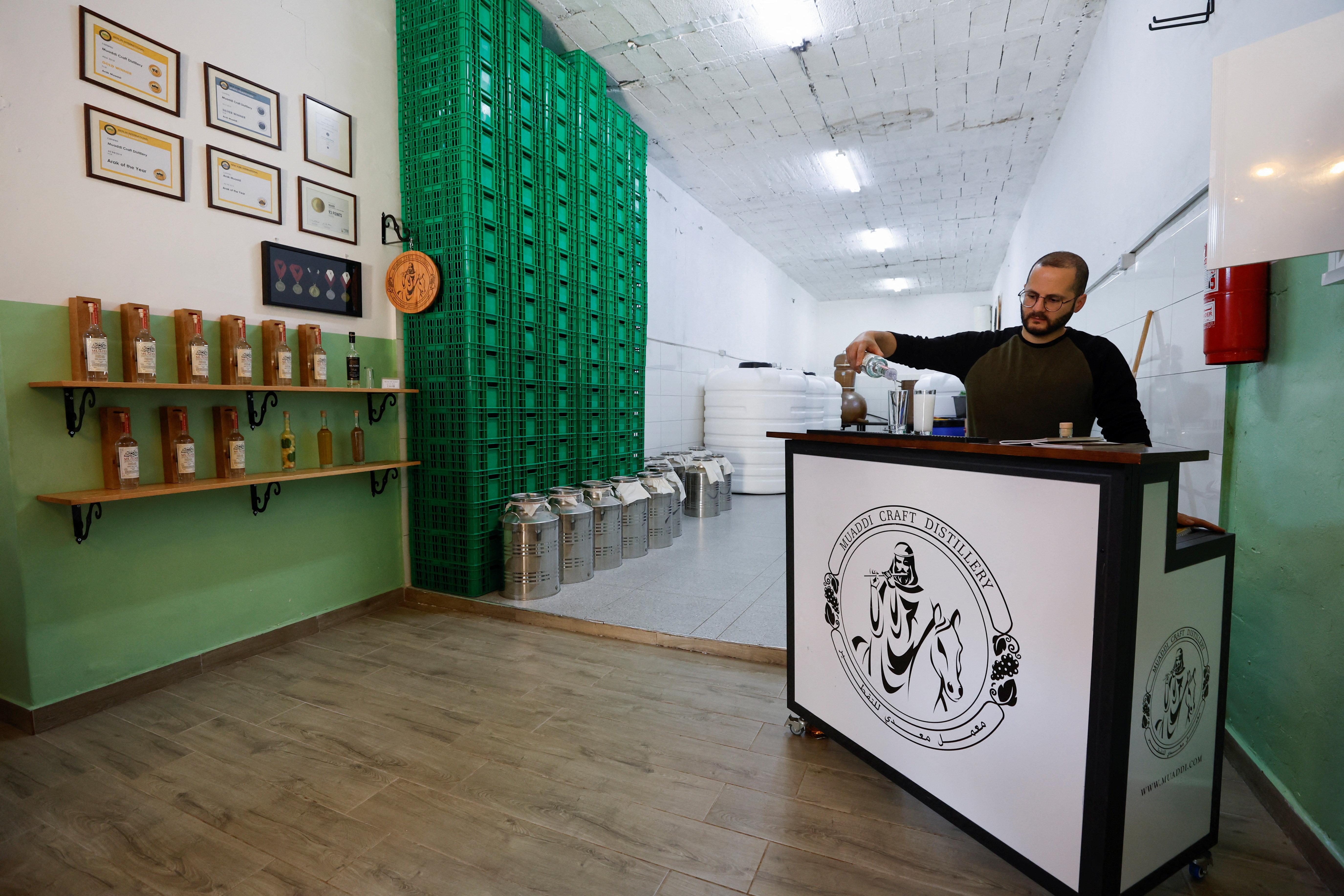 Muaddi's award-winning arak is made of indigenous species of grapes and anise grown in the West Bank. He said he hopes working with Palestinian farmers will incentivize them to keep cultivating their land in the face of Israeli threats of displacement, movement restrictions and Jewish settler violence.

Muaddi said he buys between five and 15 tonnes of grapes a year depending on demand, which make up to 3,000 bottles a year.

In late September and early October, Muaddi picks grapes that are high in sugar levels and undergo a natural wild yeast fermentation when crushed. It takes about a month for them to turn into wine, which is then triple distilled in a copper Arabian pot still. The aniseed is added in the third round.

To monitor the process, which can take up to 26 hours at a time, he sometimes sleeps on a styrofoam mattress at the Beit Jala distillery and sets an alarm for every 15 minutes.

"Making arak the traditional way needs time, it's tiring and expensive," Muaddi said. As a small producer, "it's hard for us to compete with imported goods from Turkey or China and everywhere else, even when it comes to alcohol."

But since people are willing to spend more lavishly during the holidays, it's an optimal time for sales, he said.

More than 95% of registered Palestinian businesses are small or medium in size, said Adel Hodali, treasurer of the Bethlehem Chamber of Commerce.

Craft distilleries, wineries and breweries are cropping up across the West Bank. But Hodali said that since the Palestinian alcohol market is small - given that most Palestinians are Muslim - arak makers are encouraged to export their products.

For Muaddi, reviving that tradition locally is a source of pride, no matter the cost.

"In Palestine, we're not only losing land to the occupation, but we're also losing elements of our culture and culinary heritage. I want to make arak popular again. I want to create an arak renaissance."