Students at the Christian college Liberty University have held signs to argue that its President does not represent them.

The President of Liberty University, a private evangelical university in Viginia, has been accused of taking advantage of his position and acting in his own interests by current and former top staff at the institution.

Jerry Falwell Jr. is a friend of Donald Trump's, a lawyer and became head of the university when his father died in 2007.

Articles in US media this week claimed to have spoken to several anonymous souces and uncovered a culture of fear and nepotism and claim that Falwell directed business decisions to favour his family and friends.

Falwell criticised the articles and called it a 'criminal conspiracy' against him, saying he will get the FBI involved.

In response, many who attend the university have wanted to highlight the distinction between the university, the student body and President Falwell.

Around twenty students prayed to start their demonstration and held signs with Bible verses on. 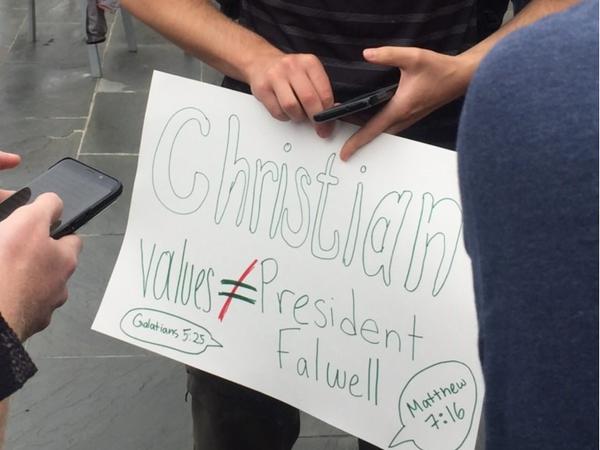 The student protest at Liberty has begun with prayer. About 20 people are participating as dozens of other students look on. pic.twitter.com/XfYC2WUV63

Students stood on campus discussing it with each other and talking to the press.

Some supported the President and invoted people to come and change their mind about him.

Falwell even praised the civil nature of the protests on his own Twitter page, saying: "The ones who had concerns and the ones who supported me were both respectful and not angry-very Christ-like in their behavior. Our students are an example the world can learn from!"

I'm so impressed with how @LibertyU students conducted themselves today at the protest! The ones who had concerns and the ones who supported me were both respectful and not angry-very Christ-like in their behavior. Our students are an example the world can learn from!