A day after Monday's government barrage, retaliatory shells rained down on the Syrian capital, killing at least one person on Tuesday.

The targeted suburbs, scattered across an area known as eastern Ghouta , have been subjected to weeks-long bombardment that has killed and wounded hundreds of people.

John Pontifex from ACN was recently in Damascus and told Premier News Hour the need for help is overwhelming.

"It's almost impossible for agencies to meet the needs of the people," he said. "Our sense is that help is going to have to increase if we are to in any way eliminate the plight of thousands of people who I saw for myself are in incredible poverty... that really brought a tear to my eye."

He added that people are "understandably extremely afraid" and the situation is "desperate". 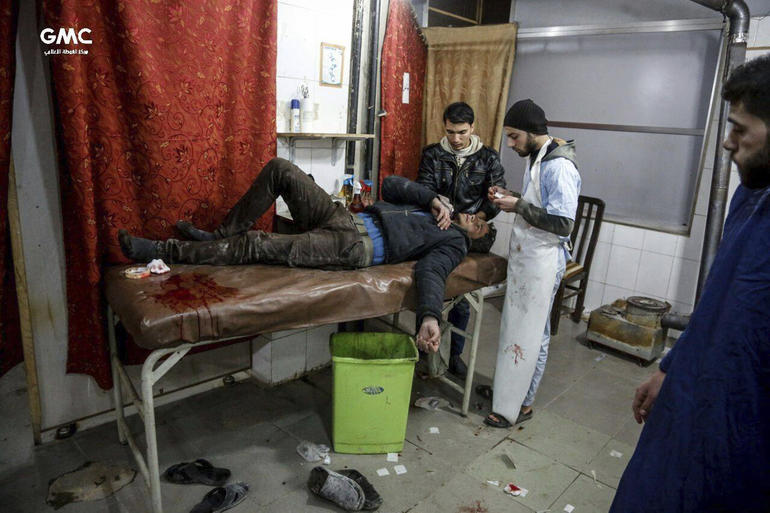 This photo released on Tuesday Feb. 20, 2018 provided by the Syrian anti-government activist group Ghouta Media Center, which has been authenticated based on its contents and other AP reporting, shows a Syrian paramedic, right, treats an injured man who was wounded by the shelling of the Syrian government forces, at a makeshift hospital, in Ghouta, suburb of Damascus, Syria. A Syrian monitoring group and paramedics say government shelling and airstrikes on rebel-held suburbs of the capital, Damascus, killed at least 98 people on Monday.

Opposition activists say government forces have brought in more reinforcements in recent days, suggesting a major assault is imminent to recapture the area that is the last main rebel stronghold near Damascus.

Monday's bombardment that killed nearly 100 people saw the use of war planes, helicopter gunships, and missiles as well as artillery, in a major escalation of violence near President Bashar Assad's seat of power.

The Britain-based Syrian Observatory for Human Rights said it was the deadliest days in eastern Ghouta since 2015, adding that 20 children and 15 women were among those killed.

ACN said it is meeting the pastoral and emergency needs of the area. The charity has completed 145 projects completed in the last 12 months and hopes to increase help.

This photo released on Tuesday Feb. 20, 2018 which provided by the Syrian anti-government activist group Ghouta Media Center, which has been authenticated based on its contents and other AP reporting, shows an injured Syrian man who was wounded by the shelling of the Syrian government forces, waits to receive treatment at a makeshift hospital, in Ghouta, suburb of Damascus, Syria. A Syrian monitoring group and paramedics say government shelling and airstrikes on rebel-held suburbs of the capital, Damascus, killed at least 98 people on Monday.

Pontifex told Premier: "Families are really struggling. One of the great tragedies is they've had various hopes that things will get better and then there are these setbacks. While we were visiting Syria we were in the main church centre received a number of attacks."

However, he said Christians there remain resilient.

"I've visited families and their messages have been 'we're strong in our faith. This faith of ours is the only thing that's keeping us together in this time of trial and torment, even though to step outside our homes is to risk daily bombardment and we still retain our faith'.

"When I heard those words I was deeply moved because when you're living that experience you can see the cost of the terrible bombardment and how the faith can really help us in times of crisis."