There is concern child migrants and refugees could once again be targeted by tear gas and water cannon at Europe's border crossings.

Christian charity, World Vision is warning against a repeat of chaotic scenes in Hungary last year, as European Union leaders are expected to acknowledge the closure of a key route used by migrants to reach places like Germany and Scandinavia.

It is estimated hundreds of thousands of people from countries such as Syria have used the so-called Balkan Corridor to travel from Greece and Turkey to Croatia and onwards towards northern Europe via Macedonia and Serbia.

Border crossings between Macedonia and Greece have already been limited to a trickle after Austria, Croatia, Hungary and Slovenia backed border restrictions imposed by Macedonia. World Vision's Head of Policy Affairs in the UK, Gavin Crowden, claimed the Balkan Corridor has been "a lifeline" for migrant families.

Speaking on Premier Christian Radio's News Hour about the closure of the route's closure, he said: "It's going to have a significant impact.

"I was at the Serbian border with Macedonia when it closed and what that leads to is just confusion [and] chaos. The borders are not set-up in a way that gives any dignity to children and their families." 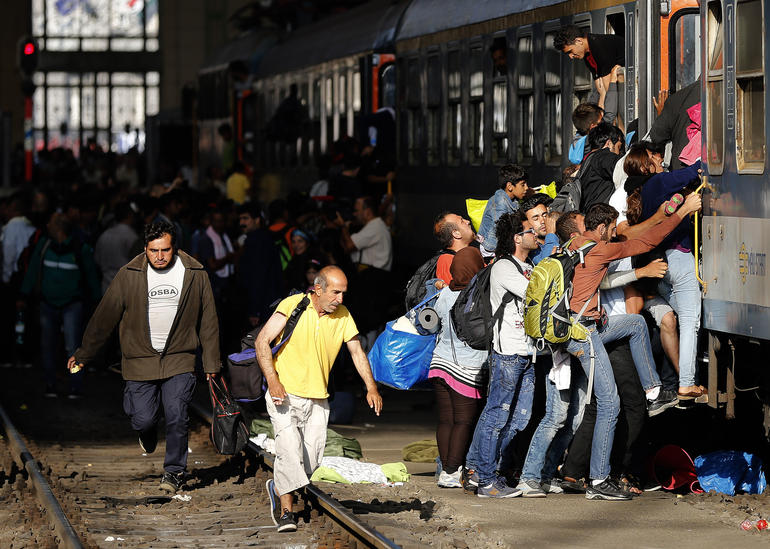 Migrants try to board a train at the railway station in Budapest, Hungary

Gavin went on to say: "How any agreement that comes out of today is implemented is something that is paramount. What we don't want to see are repeats of children being tear-gassed and water-cannoned, as we saw on the Hungarian border towards the end of last year."

He went on to say any closure of the Balkan Corridor must be properly communicated to migrant families, allowing them to plan their journeys but he also urged the EU to agree on a long-term solution for families fleeing war-torn places like Syria.

According to a draft statement prepared for Monday's summit in Brussels and seen by the Associated Press, EU leaders have said they will also pursue "comprehensive, large scale and fast-track returns to Turkey of all irregular migrants not in need of international protection". Rights groups are warning many of the 2.75 million refugees already in Turkey - most of which come from Syria - have been living in difficult conditions.

The European Union is trying to encourage Turkey to accept migrants returning from the EU by offering a £2.3 billion refugee aid package, the relaxation of visa rules and a fast-tracked EU membership process.

Leaders have been criticised by the human rights group Amnesty International for using Turkey as a buffer against migrants, calling the approach "a dangerous and deliberate ploy to shirk their responsibilities to people fleeing war and persecution".

The Netherlands currently holds the EU's rotating presidency and the country's prime minister said additional help will be required if more migrants are sent back to Turkey.

He said: "We will need to bring relief to Turkey, and that means you have to be willing to take people in from Turkey who will probably qualify for asylum".