Christian campaigners are calling on the Church of England to stop facilitating the arms trade through events.

It follows the news that Church House, the Church's headquarters, will host an event sponsored by some of the world's largest arms companies.

Two events sponsored by arms related businesses will be held in July, where the Secretary of State for Defence, Michael Fallon MP will speak.

It is reported that one sponsor, MBDA Missile Systems, sold arms to Colonel Gaddafi in Libya.

Other sponsors include Lockheed Martin, one of the world's biggest manufacturer of arms.

Emma Anthony is from the Fellowship of Reconciliation. She told Premier: "A big part of our objection, apart from just what they do point blank, is that by hiring Church House Conference Centre they are trying to piggy back on the moral image of the church, to sell weapons.

"They know that the Bible says we mustn't kill each other, and Jesus told Peter to put down his sword, even when Jesus was about to be violently executed by the state."

Commenting on the Church of England's ethical investment policy, she added that: "I think people will be horrified that it's happening at Church House Conference Centre, particularly because the church, rightly, has said that they will not invest in these companies - now I think 10 per cent is far too high, I think they should just have an outright ban."

Symon Hill, from Campaign Against Arms Trade Christian Network said: "These companies are not hiring Church House Conference Centre because they want to support the Church.

"They are doing it because it's good for business.

"Unfortunately, Church House Conference Centre is giving practical support and a veneer of legitimacy to an industry that profits from war."

A Church of England spokesperson said: "The Conference Centre at Church House provides a meeting space and conference facilities for a range of bodies from Government Departments to Think Tanks, from UK Feminsita  through to the General Synod of the Church of England.

"The Royal United Services Institute (RUSI) is a long established think tank which deals with foreign policy, defence and security. Recently they hosted an event with the former editor of the Guardian speaking on Edward Snowden and the implications for 21st century surveillance.

"To suggest that by accepting this booking from the Royal United Services Institute Church House is accepting money from arms dealers or is supporting arms sales is ludicrous." 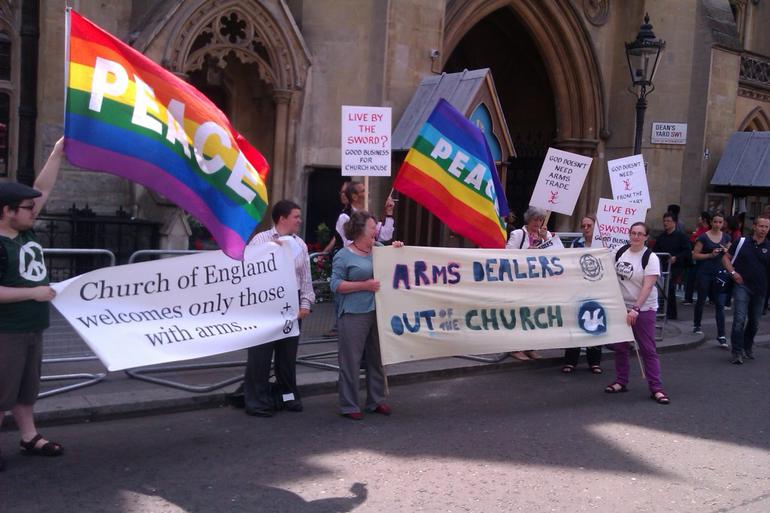