Archbishop Justin Welby: we pray for those who weep over Notre Dame fire

The Archbishop of Canterbury says he is praying for everyone moved to tears by the destruction caused by a major fire at Notre Dame Cathedral in Paris.

Most Rev Justin Welby tweeted his support for those mourning the 13th century landmark after flames destroyed its roof and brought down the iconic spire.

He said: "Tonight we pray for the firefighters tackling the tragic Notre Dame fire - and for everyone in France and beyond who watches and weeps for this beautiful, sacred place where millions have met with Jesus Christ.

"Nous sommes avec vous [we are with you]."

Hundreds of fire fighters were called to the scene after a blaze broke out at around 6pm UK time. It was not until 3am on Tuesday that the incident was declared under control.

Fr Aiden Troy from the English-speaking Roman Catholic Church of St Joseph's in central Paris told Premier: "There's a sense that something [of the building] has been saved.

Tonight we pray for the firefighters tackling the tragic #NotreDame fire - and for everyone in France and beyond who watches and weeps for this beautiful, sacred place where millions have met with Jesus Christ. Nous sommes avec vous.

"I was looking at the headlines of many of the French newspapers this morning, and it's like the heart has been torn out of the city.

[There is] a great sadness and, almost...a great numbness."

The fire, which is not being treated as arson or terror-related, was described as "heart-breaking" in a statement released by the Church of England.

Pray for the people of Paris. Pray for the firefighters. Pray for our desire and determination to rebuild this great Cathedral in the same faith that inspired it over 1000 years ago. #NotreDame

Director of Cathedrals and Church Buildings, Becky Clark, said: "The fire and the destruction it has caused are heart-breaking.

"We stand together in prayer with all who love Notre Dame: its worshipping community, those who have visited, and those who only know it from afar. 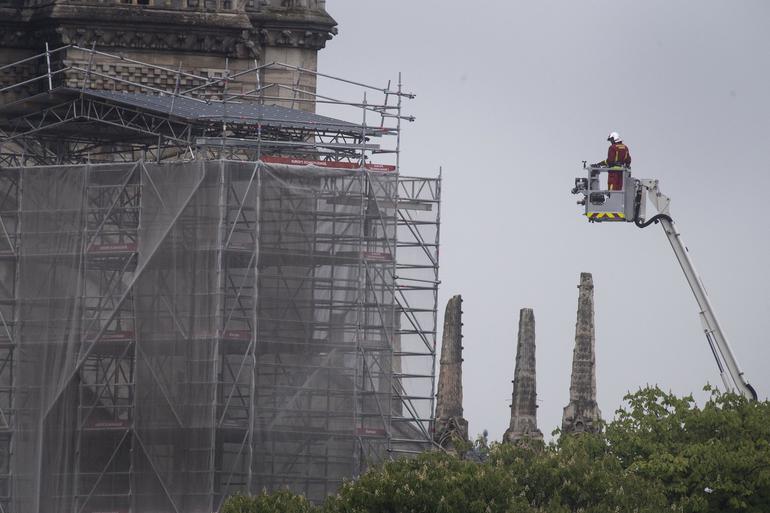 "We understand their sense of loss, and the uplifting connection people feel with cathedrals and churches the world over.

"But no matter the destruction, the spirit of what it means to be a cathedral can and does survive such catastrophes.

"This is a catastrophe and all European cathedrals, Catholic and Protestant will want to reach out to the people of Paris and the Church in France."
Dean of Lichfield.#NotreDame #notredamedeParis #Paris #heartbreaking pic.twitter.com/oU7eMhYXuD

Shortly before 9am, Paris firefighters said lingering pockets of fire at Notre Dome had been fully extinguished.

There was a rush to save the many valuable artefacts and relics housed inside the building.

A police investigation will be held, the Paris prosecutor's office said.