The Archbishop of Canterbury Most Rev Justin Welby summed up his time in the Holy Land as "complicated" today, following a visit to Hebron where he witnessed "e

Hebron - the West Bank's largest city - has been divided into two sections for the past 20 years. The larger area - H1 is controlled by the Palestinian Authority, while Israel retains military control in H2.

The city has often been the centre of violent clashes. Israeli border police shot a Palestinian man in the area last week. Police said the 25 year old assailant ran towards border forces, screaming with a knife in hand and threatening to stab them. 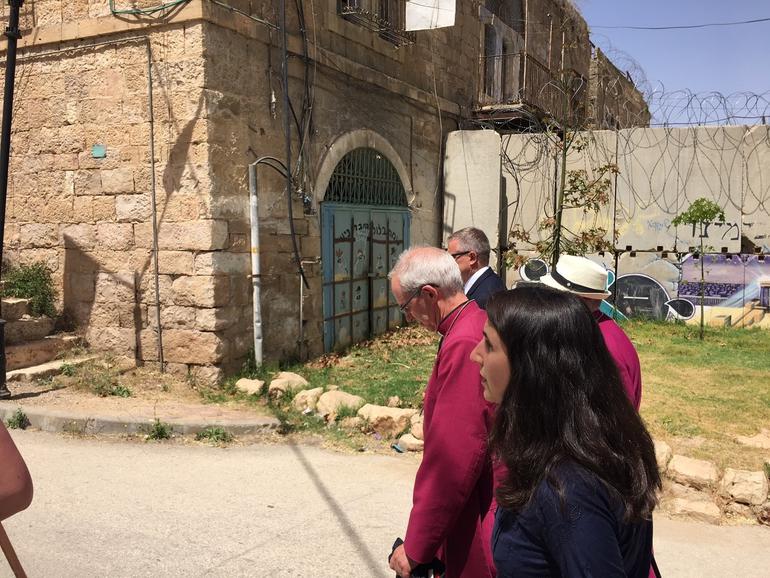 While in Hebron, the Archbishop visited the tombs of the biblical patriarchs and matriarchs Abraham and Sarah, Isaac and Rebecca and Jacob and Leah.

The Cave of the Patriarchs building is divided in two, with one portion being under Jewish control and the larger portion making up the Ibrahim Mosque, which is under Palestinian jurisdiction.

Both sides agreed to divide the Cave of the Patriarchs in 1996, following negotiations. However, last week, the United Nations condemned Israel's presence there, calling the site "an integral part of the Occupied Palestinian Territory". Speaking outside the 2000 year old building today, one local Jewish settler told the Archbishop that Jews continue to live in Hebron - despite condemnation from the international community - because of biblical commandments.

"God commands it." Michael Lixenberg said, adding, "We live our lives not according to what we want to do, but what we feel and understand God wants us to do."

Welby received briefings on the history of the area as well as the current political situation from the Palestinian director of Hebron Rehabilitation Council (HRC) Imad Hamdan. Welby praised the "utterly inspiring" work of HRC who aim to revive Hebron's Old City by renovating old buildings and encouraging Palestinians to move into the area, despite the high level of political tensions.

The Archbishop was also briefed by Orthodox Jew Eliyahu McLean who suggested the shared tomb has "potential" to be "a centre for world peace". 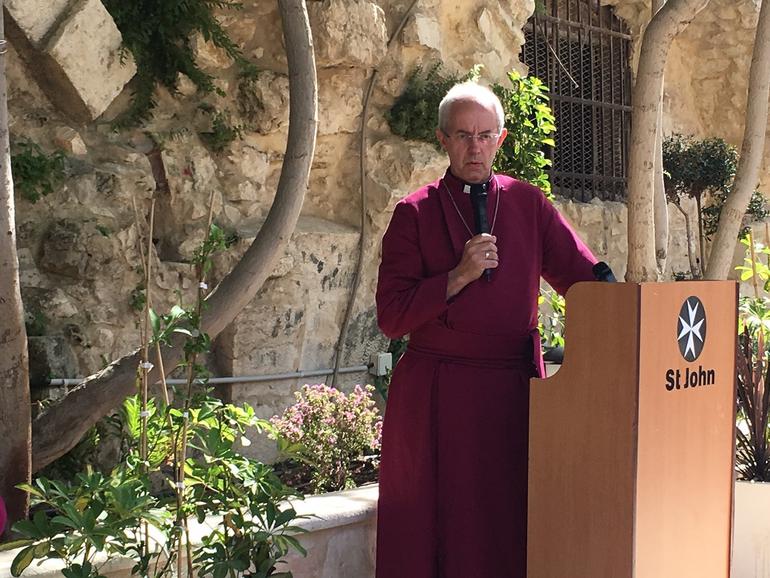 "Abraham's children are here. Are we not one family? Jews, Christians and Muslims - are we not Abraham's family? Don't you think Abraham is slightly upset what his children are doing to each other in his name?"

Mr McLean and the Archbishop's delegation said a brief prayer outside Abraham's tomb: "May the walls of fear between Abraham's family come tumbling down".

Welby finished his visit by walking down Shuhada Street - an area under Israeli military control which has been closed to Palestinians for nearly two decades. Welby, who was accompanied by security personnel for the duration of his trip, was told that Israel's decision to close the area had resulted in a "ghost town".

Summing up his time in the Holy Land at a press conference this evening, Justin Welby said: "Having come many times before, each time I come I realise I know less and don't know more than the last time I came!"

"The people who have most touched our hearts, moved us have been those caught up in the depths of the conflict in extreme suffering and intolerable and unending pressure.

"We can play the tunes of trying to show that each is worse than the other. But I realised afresh today that everyone - from the soldiers on the street doing their national service, to the people that they find themselves caught up in conflict with - suffers terribly from the absence of peace".

Speaking of the "complexity" of the conflict, Welby admitted, "Everything you say here has to be qualified with the comment 'but it's not as simple as that'. Everything has to be seen In the light of a history that stretches back further than any other conflict in the world."

Welby said he was "overwhelmed by the extent of the problems" in Hebron but ended his comments on a more hopeful note: "We are in the season of Easter and every Christian gathering we've been to has begun with the statement 'Christ is risen'. From the resurrection of Jesus Christ flows hope and confidence that God in the midst of despair can bring the greatest future and life and purpose."