A survey by the Wall Street Journal and NBC news has suggested that young Americans are far less patriotic, proud of parenthood and pious than their predec

In a poll conducted in August of 1,000 people, 48 per cent said religion was 'very important' to them personally, a 14 per cent decrease from the 62 per cent who said it was very important to them in a 1998 poll.

The number of people who felt it was 'somewhat important' remained the same at 27 per cent across 21 years.

The importance of having kids decreased from 59 percent to 43 per cent since the 90s. 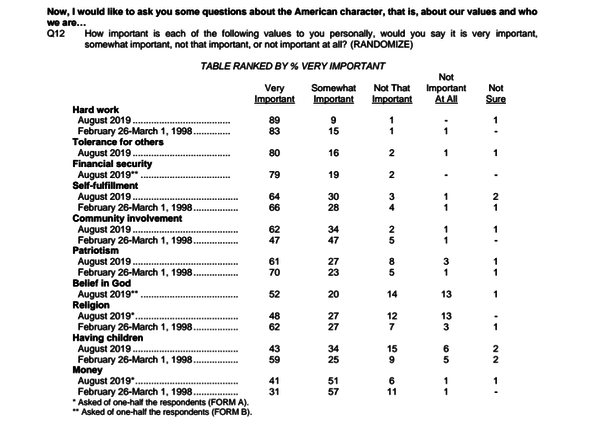 Wall Street Journal reporter Chad Day said: "The values that Americans say define the national character are changing, as younger generations rate patriotism, religion and having children as less important to them than did young people two decades ago."

The survey also asked about how responders felt about the economy, race relations and how they voted in the 2016 Presidential election.

"Generational differences on personal values were most pronounced among Democrats. In fact, the views of Democrats over age 50 were more in line with those of younger Republicans than with younger members of their own party," Day said.

There were similarities though, with hard work remaining the most important value among both generations, with over 80 percent in both polls.