A church in a suburb of Washington has been vandalised with a racist pro-Trump message.

The Episcopal Diocese of Washington said the vandalism occurred on Saturday night at the Church of Our Saviour in Silver Spring, Maryland.

A banner advertising the church's Spanish-language service was defaced with the words: "Trump nation. Whites only."

The same phrase was written in black ink of the wall of the church. 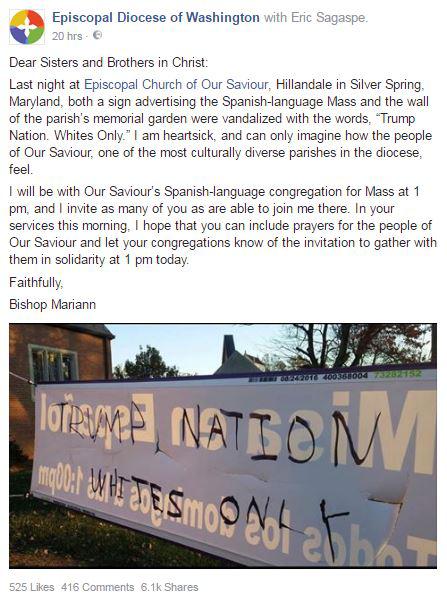 Bishop Marianne Budde, the head of the Episcopal Diocese of Washington, called for unity.

The Bishop said it was vital for President-elect Donald Trump and his supporters "to separate themselves from acts of violence and hate that are being perpetrated in his name."

The bishop visited the parish Sunday afternoon along with other religious leaders to show the community their support.

On Sunday, the Diocese reported on Facebook that the church was filled with well-wishers from the community.

After the service, children from the parish wrote messages of love on the pavement outside the church in chalk.

In a separate incident in Indianapolis, the St David's Episcopal Church was also vandalised on Saturday night.

Vandals painted a swastika and sprayed "Heil Trump" on the outside wall of the building.

The Southern Poverty Law Centre has said over 200 incidents of harassment and racism have been reported since Trump won the US election on Tuesday.