Three Americans that have been released from detention in North Korean have thanked God and US President Donald Trump for their freedom.

In a statement released through the US State Department, the men, said: "We would like to express our deep appreciation to the United States government, President Trump, Secretary Pompeo, and the people of the United States for bringing us home.

"We thank God, and all our families and friends who prayed for us and for our return. God Bless America, the greatest nation in the world."

Mr Trump was on hand to personally greet Kim Dong Chul, Kim Hak Song and Tony Kim at Joint Base Andrews, in the Washington DC area, along with many senior administration officials.

The men returned after US secretary of state Mike Pompeo was in Pyongyang to discuss Mr Trump's plans to meet Mr Kim. Kim Hak-song was held on suspicion of "hostile acts" in May 2017. He had previously described himself as a Christian missionary who intended to start an experimental farm at the Pyongyang University of Science and Technology (PUST).

Kim Dong-chul is a pastor in his early 60s who was detained in 2015 on spying charges. He was then sentenced to ten years hard labour.

Welcoming the three Americans at Joint Base Andrews, Mr Trump said of Mr Kim: "I really think he wants to do something."

Referring totalks between his administration and the North Korean government, he added: "It's never been taken this far."

Mr Trump said he will not disclose whether he will have any personal conversations with Mr Kim as they prepare for their historic summit in the coming weeks.

The three former captives are being transported to Walter Reed National Military Medical Centre for further evaluation and medical treatment.

On behalf of the American people, WELCOME HOME! pic.twitter.com/hISaCI95CB

Despite a middle-of-the-night landing (2.42am local time, 7.42am BST), first lady Melania Trump, US vice president Mike Pence and a host of senior administration officials joined Mr Trump to celebrate the occasion.

The president and first lady boarded the medical plane on which the men travelled to take a private moment with them. They then appeared at the top of the aeroplane stairway with the three and applauded as the men gestured in triumph.

Mr Trump said: "This is a special night for these three really great people."

On the US relationship with North Korea, Mr Trump said: "We're starting off on a new footing."

The released men's families were not on hand for the ceremony.

Singapore has emerged as the likely site for the Trump-Kim summit, late this month or in early June, as Mr Trump seeks to negotiate denuclearisation of the Korean peninsula in his highest-stakes foreign policy effort yet.

Mr Trump announced that the demilitarised zone between the Koreas would not host the summit. Mr Pompeo said the meeting would last one day and possibly a second. 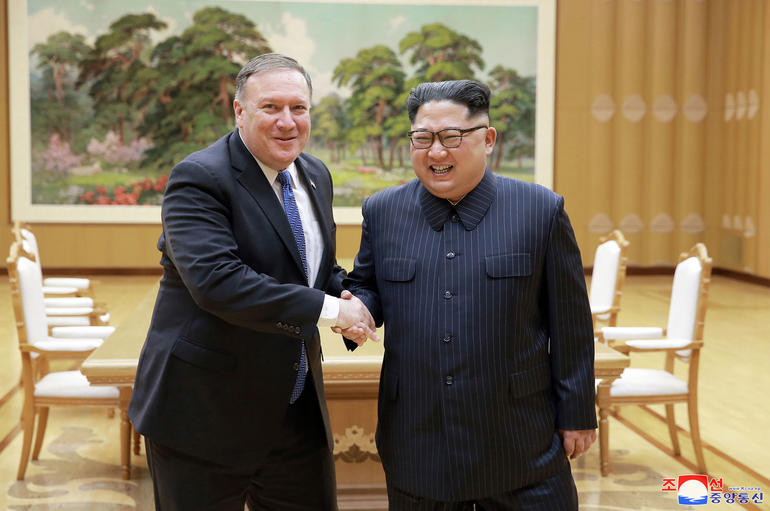 In this Wednesday, May 9, 2018, photo provided on Thursday, May 10, 2018, by the North Korean government, U.S. Secretary of State Mike Pompeo, left, poses with North Korean leader Kim Jong Un for a photo during a meeting at the Workers' Party of Korea headquarters in Pyongyang, North Korea.

The president had made a point of publicly thanking North Korea's leader for the prisoners' release - "I appreciate Kim Jong Un doing this" - and hailed it as a sign of cooling tensions and growing opportunity on the Korean peninsula.

Mr Kim decided to grant amnesty to the three Americans at the "official suggestion" of the US president, said North Korea's official news agency, KCNA.

North Korea had accused the three Korean-Americans of anti-state activities. Their arrests were widely seen as politically motivated and had compounded the dire state of relations over the isolated nation's nuclear weapons.