Pope Francis has refused to describe Islam as "terrorist" saying "it's not right to identify Islam with violence".

On a press conference during a flight back to Rome from Poland the pontiff was asked why he never used the word "Islam" when condemning killings by extremists like that of an elderly priest in France last week.

Because it's "not fair and not true", Francis replied.

Every religion had its "little group of fundamentalists", he added.

He said that if he spoke of violent Islam, he would have to speak of violent Catholicism, since Catholics kill too.

Referring to the Islamic State group, Francis, 79, said it "presents itself with its violent identity card, but it's not Islam". 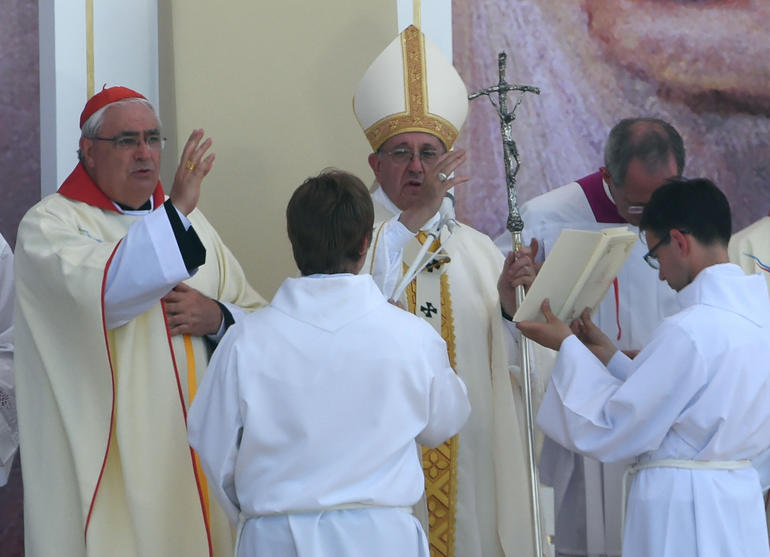 He was returning from World Youth Day in Poland, a five day pilgrimage in which he prayed privately in a church that God protect people from the "devastating wave" of terrorism in many parts of the world.

He arrived in the country just days after terrorists rushed into a church in the French countryside and murdered the elderly priest there, slitting his throat, as he was celebrating Mass.

Earlier in July a terrorist professing Islam as his faith drove a lorry into people in Nice.

God, said Francis in his final homily of the pilgrimage, "demands of us real courage, the courage to be more powerful than evil, by loving everyone, even our enemies".

"People may judge you to be dreamers, because you believe in a new humanity, one that rejects hatred between peoples, one that refuses to see borders as barriers and can cherish its own traditions without being self-centred or small-minded," Francis said.

Pope Francis also explained why he took a tumble during an outdoor Mass in Czestochowa, Poland's most popular Catholic shrine.

He said of the July 28 fall, which happened while he was sprinkling incense around the altar at the Jasna Gora monastery: "I was watching (an image of) the Madonna, and I forgot the step.

"I let myself fall and this saved me. Because if I tried to resist it, I would have gotten hurt."