North Korea has topped a new ranking of countries where persecution against Christians is worst for the 16th consecutive year.

Releasing its latest World Watch List, Open Doors said it believes 70,000 believers are being held in labour camps across the communist dictatorship.

Giving a warning for the wider continent Lisa Pearce, CEO of Open Doors UK & Ireland, said: "Persecution levels have been rising rapidly across Asia and the Indian subcontinent, driven by extreme religious nationalism which is often tacitly condoned, and sometimes actively encouraged, by local and national governments."

While Somalia, Afghanistan, Pakistan and Sudan complete the top five, Open Doors also said Laos, Bangladesh, India and Vietnam have seen the biggest rises in the persecution during the last year.

Lisa Pearce went on to say: "This year there is a clear pattern of rising religious intolerance across the Indian sub-continent which affects many millions of Christians.

"Religious nationalists attempt to forcibly convert people to the dominant faith of their nation, often turning to violence when community discrimination and non-violent oppression do not succeed in imposing their religious beliefs on minority Christians. 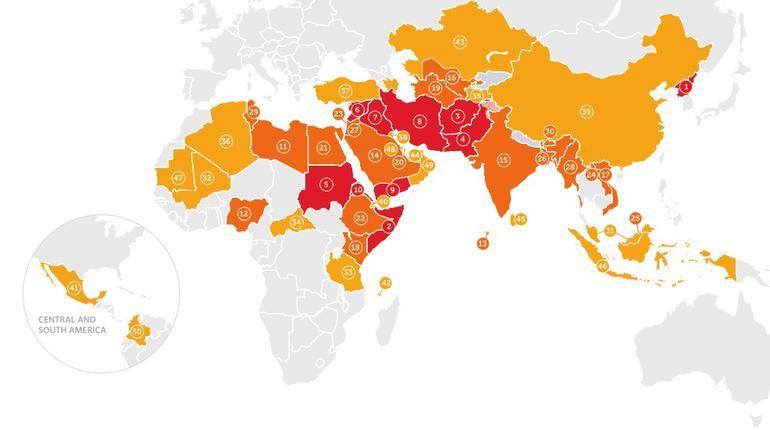 "These Christians are often from the lower castes, such as the Dalits in India who face huge socio-economic problems - they are an easy target for extreme nationalists."

Open Doors is also warning Islamic fundamentalism is rising most sharply in sub-Saharan Africa, with extremist Islam spreading "across Africa westwards from Somalia", adding "almost every country from Kenya upwards is affected."

Highlighting countries such as Syria, Iraq and northern parts of Nigeria, Open Doors says Christians are increasingly being persecuted through deliberate "sabotage" of homes and churches by extremists trying to eradicate Christianity from certain areas.

Rev Aminu Sule, whose church in Dameturu in Yobe State was attacked six years ago, told Premier believers in his community are living in "fear".

He said: "Most of the churches within that community were burnt by Boko Horam and the attacks keep on persisting from that day, for more than three years.

"We are living in fear because we do not know what will happen tomorrow, because we are living among a hostile environment; that is the position of the Church today." 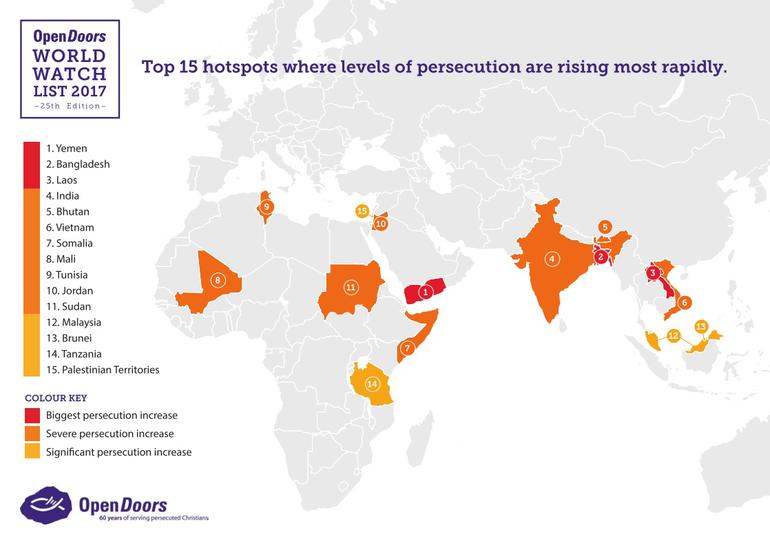 Rev Sule went on to say believers are discriminated against and marginalised under the state government.

On Premier's News Hour, Open Doors' Lisa Pearce said there will be a particular focus on persecution in India - the world's second-largest country - when their findings are discussed in a meeting at the Houses of Parliament on Wednesday afternoon.

She said: "One of the messages that we want to say is that, as a country that has a trade relationship with India, we should use our influence there to really call on the Indian government to do better in terms of freedom of religion or belief for minorities."

Asked whether there were any silver linings in their statistics, Lisa Pearce added: "Nigeria, where last year, there were several thousand killings of Christians, actually that number has dropped right down this year.

"[That is] largely because Boko Horam have been more contained and pushed back, and, therefore, they are not being able to operate with impunity in there way that they were a year ago."