A group of lawyers in China may lose their qualifications after defending 40 Christians.

According to Christian religious freedom charity China Aid, the Christians have been unfairly swept up in a province-wide crackdown on a cult and now their lawyers' qualifications have come under government review.

The charity said 200 people have been arrested across Yunnan Province for supposed involvement in a religious organisation called Three Grades of Servant's.

The Chinese Communist Party has deemed the group a dangerous cult and 40 Christians have been accused of being part of it.

However, all of the accused Christians maintained that they only believed in Jesus. 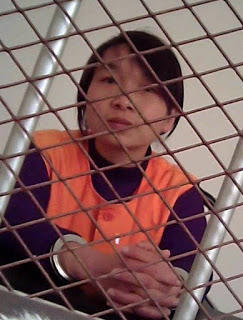 Tu Yan, one of the Christians falsely accused of belonging to a cult, sits handcuffed behind bars.

One of the defendants said "she only had done good work according to Biblical principles and preached how humans can be saved, never harming anyone".

China Aid wrote in a statement: "Just recently, local officials accused their lawyers of defending them illegally, even though ten Christians... have yet to be tried and every Chinese person has the right to a lawyer. Additionally, 13 Christians tried... in late November have yet to hear their verdict. "

One of the lawyers, Xiao Yunyang, said he and his colleagues intend to continue defending their clients and are coming up with a contingency plan.