Charities urge Theresa May to challenge China on Christian crackdown

Theresa May has been urged to challenge China's president over religious freedoms in the country during a state trip.

The prime minister's visit to China from 31st January to 2nd February comes as new restrictions on churches are due to come into force this week. The rules will impact those which aren't registered with the Government.

Andre Boyd with Release International told Premier persecution against Christians in the country has become dire.

"In all conscience some Christians simply can't do that. Christians who are not part of the official system under the government control are being branded as evil cults."

In Yunnan Province, six members of an unregistered church group were sentenced to up to 13 years in prison for 'using an evil cult to organize to undermine law enforcement' this month.

Also this month, Chinese authorities in Shanxi Province demolished the 50,000-member Golden Lampstand (Jindengtai) Church using dynamite, and two pastors in Guizhou, one of whom is in prison, were fined over $1 million for collecting 'illegal' donations from members of the congregation.

Christian Solidarity Worldwide (CSW) said while talks about expanding trade are important, they shouldn't come at the expense of challenging Chinese leaders on their treatment of Christians.

Benedict Rogers from CSW said: "We hope she will raise these cases and urge China that if it wants to be a global superpower, which it clearly is in the running for, it needs to uphold human rights for its own people." 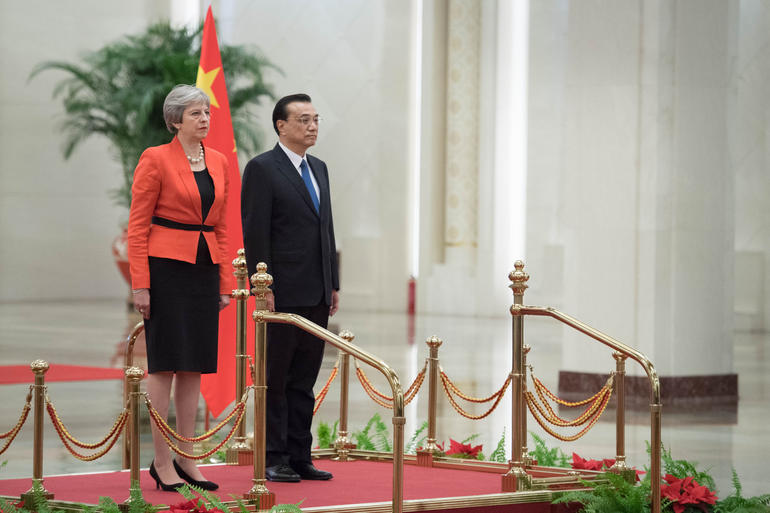 Prime Minister Theresa May inspects a ceremonial guard at the Great Hall of the People in Beijing with her Chinese counterpart, Premier Li Keqiang. The prime minister accompanied by a business delegation is on a three day visit to China to encourage post-Brexit investment in the UK.

Tania Corbett from Open Doors told Premier:  "I think it's certainly an opportunity for the world to ask questions and to ask for implementation of freedom of religious belief within the Chinese framework."

Boyd said while sanctions may seem like the most obvious or popular route to address freedom of religion with China, friendship would be the better way and could have leverage.

"It's easy sometimes to talk about sanctions and sanctions will often mean turning your back on people," he said.

"In this case it's a good thing that Britain is engaging with China. It's a way in; it's a foot in the door.

"I'm sure she will actually use that, but we really hope that she we will make it very clear to the Chinese authorities that 'do you know the church is not against you?  The church is for you, how about supporting them?' "