Leading Catholics in Australia have attacked a speech by ousted Prime Minister Tony Abbott, after he urged Europe to take a harder line on the refugee and migra

During a speech he made in London he said that "misguided altruism" was "leading much of Europe into catastrophic error."

The former Catholic Australian leader said that his country is the only in the world to have successfully defeated people-smuggling.

During his time in power Tony Abbott carried out the controversial policy of turning away boats full of people and sending them elsehwere.

The previous government reintroduced a policy of offshore processing towards the end of 2012, where it outsourced contractors to host temporary detention camps for asylum seekers.

The Sydney Morning Herald has reported that retired Bishop Pat Power, Former Auxiliary Bishop of Canberra and Goulbur, said he was "ashamed" by the comments.

Bishop Power also said he objected to Mr Abbott's suggestion that a "wholesome instinct" to follow the Christian tenet of "love thy neighbour" had led Europe to feel obliged to accept more people fleeing conflict in the Middle East that they could cope with.

According to the BBC he said: "People will make their own judgements but that's completely at odds with what's at the heart of Christianity.

Mr Abbott was speaking at the annual Margaret Thatcher lecture to Conservative party members and ministers.

He even advised Angela Merkel, the German Chancellor, to ignore the speech.

Merkel's approach to the refugee crisis has won both praise and criticism.

He continued: "I don't think she's helped in the least by an ex-prime minister who has been dumped at the other end of the world turning up and saying 'it's about time you got your naval vessels to start returning people to places like Libya'."

The #TheToneCommandments has been trending on Twitter in reaction. 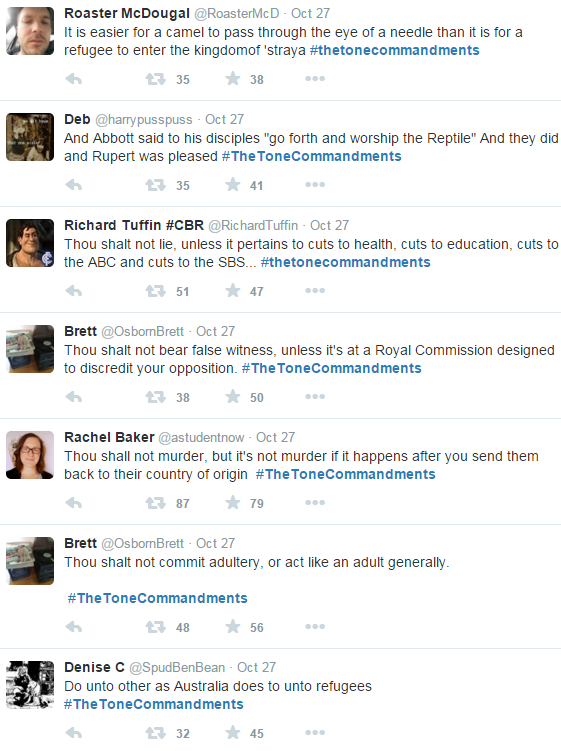