Australian Cardinal George Pell, one of Pope Francis' top advisers, gave evidence at an extraordinary public hearing of an Australian investigative commission just a few streets from the Vatican.

Cardinal Pell spoke via video link from a Rome hotel to the royal commission sitting in Sydney. He said he was too ill to fly and appear in person.

In the front row of the conference room were two dozen Australian abuse survivors and their companions who had travelled across the globe to be on hand for Cardinal Pell's evidence, a significant show of accountability in the church's long-running abuse saga.

Questioned by the lead counsel assisting the commission, Gail Furness, Cardinal Pell admitted the Vatican had fallen short of what was expected.

He was asked about how he dealt with abuse allegations as a priest, educator and adviser to former Ballarat bishop Ronald Mulkearns.

Cardinal Pell said: "I'm not here to defend the indefensible. The church has made enormous mistakes and is working to remedy those."

He said the church had "mucked things up and let people down" and for too long had dismissed credible abuse allegations "in absolutely scandalous circumstances".

He described Bishop Mulkearns' handling of Australia's most notorious paedophile priest, Gerald Ridsdale, as a "catastrophe for the church".

He too had made mistakes in often believing the priests over victims, he admitted.

"I must say in those days, if a priest denied such activity, I was very strongly inclined to accept the denial," he said.

It is the third time that the Australian cardinal, Pope Francis' top financial adviser, has given evidence about the sex abuse scandal but the current round has generated intense international attention because it is taking place a short walk from the Vatican. 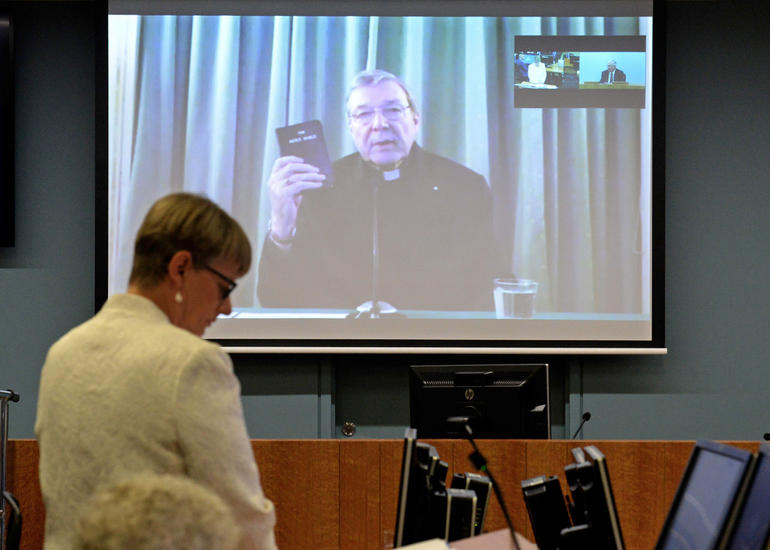 David Ridsdale, who was abused for four years by his uncle, Fr Gerald Ridsdale, said victims in recent days had conducted more than 100 media interviews before Cardinal Pell's evidence even began, and was grateful that the horror of what transpired in Ballarat was finally being known outside Australia.

Gerald Ridsdale is in prison after being convicted of multiple abuse charges.

David Ridsdale said Ballarat's survivors merely wanted Cardinal Pell to "stand up and take responsibility on behalf of the church" for what transpired in his own home town.

"We're here to seek the truth. We're here to heal our city," Mr Ridsdale said. "We have the highest suicide rate among men in Australia. We have some of the worst drinking and violence problems. And it all stems from that abuse."

The commission's current hearings relate to Ballarat and how the Melbourne archdiocese responded to allegations of abuse, including when Cardinal Pell served as an auxiliary bishop.

Fr Gerald Ridsdale was moved between parishes for years allowing him to continue abusing children.

Cardinal Pell has long denied allegations that he was involved in transferring Gerald Ridsdale - with whom he once lived at the Ballarat presbytery - and said he never tried to buy the silence of his nephew, as David Ridsdale alleges.

Cardinal Pell said he had no suspicions that Gerald Ridsdale was a deviant - when he was finally brought to justice, Pell accompanied him to court.

In a statement, Cardinal Pell repeated his support for the royal commission's work, vowed to meet individually with victims who had travelled to Rome and said he hoped the coming days "will eventually lead to healing for everyone".

He said he had tied a yellow ribbon on the fence in the Our Lady of Lourdes Grotto in the Vatican Gardens in a show of solidarity with the Loud Fence movement launched in Ballarat to support survivors of abuse.