Billy Graham's children paid tribute to "America's Pastor" as the famous preacher was laid to rest at the family home in North Carolina.

His adult children - all speakers or preachers in their own right - recalled being taught by their parents how to read scripture aloud and deliver sermons, but also taking quiet walks with their father and feeling his embrace even when they made mistakes.

His oldest son, Franklin Graham, who delivered the main funeral message, said all of those qualities were part of the whole.

Mr Graham's funeral message, which included a Gospel call to repentance and salvation, followed shorter remarks by his siblings in a service that lasted just over an hour before an invitation-only crowd of approximately 2,000.

"I believe, from Heaven's perspective, that my father's death is as significant as his life. And his life was very significant. But I think when he died, that was something very strategic from Heaven's point of view," said his daughter Anne Graham Lotz, later adding: "I believe God is saying: 'Wake up church! Wake up world!'" 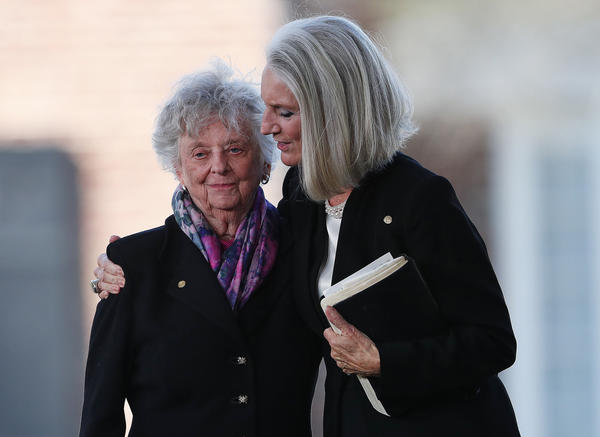 The congregation included President Donald Trump, Vice President Mike Pence and their wives. Neither Mr Pence nor Mr Trump spoke during the service that was streamed live online, but they met privately with the family beforehand.

The funeral planning began a decade ago with Billy Graham himself. It also reflected his family's desire to capture the feeling of the crusades that made him the world's best-known Protestant preacher of his era.

Mr Graham, who died last week aged 99, brought a message of salvation to millions during visits and live broadcasts to scores of countries.

The funeral served as a Billy Graham crusade told through his children.

Ms Lotz read Scripture, inserting her name into the passages to make her relationship with God more personal and breaking it down intellectually, like her father.

Youngest daughter Ruth told about how she sinned and did not listen to her father with a hasty marriage, but he was waiting for her with open arms when she realised her mistake.

Franklin, now CEO of the Billy Graham Evangelistic Association, wrapped up with his father's central theme, that the only path to salvation is to accept Jesus Christ.

While Franklin Graham steered clear of politics during his message, the Trumps and Pences were the first guests he welcomed as he began. 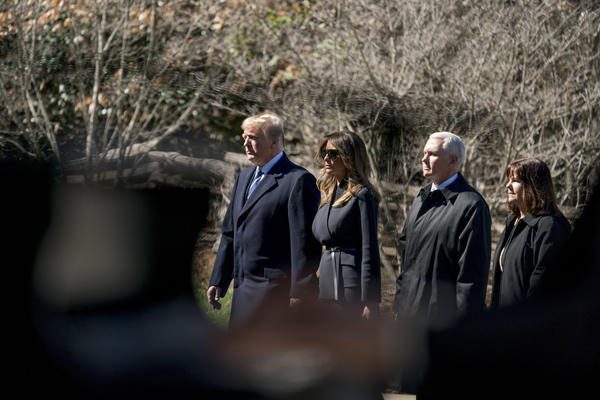 His invitation to be saved by Jesus contained this barb: "The world, with all of its political correctness, would want you to believe that there are many roads to God. It's just not true."

Like Mr Graham's famous crusades, the funeral featured singers who had shared his stage in years past including Linda McCrary-Fisher, Michael W. Smith and the Gaither Vocal Band.

The line-up of clergy and singers from as near as North Carolina and as far away as Asia, was racially diverse - more so than the mostly white audience.

The funeral came at the end of more than a week of mourning that included crowds lining the road for a procession from Mr Graham's home in the mountains to Charlotte, where he grew up.

Approximately 13,000 people - including former presidents George W Bush and Bill Clinton - filed past his coffin during a public viewing in Charlotte this week.

On Wednesday, Mr Graham became the first private citizen since civil rights icon Rosa Parks in 2005 to lie in honour at the Capitol Rotunda in Washington.

Mr Graham was being buried next to his wife in a memorial prayer garden at the Billy Graham Library, with his grandchildren serving as pallbearers.

His pine plywood casket was made by inmates at the Louisiana State Penitentiary at Angola. The grave marker reads: "Preacher of the Gospel of the Lord Jesus Christ." 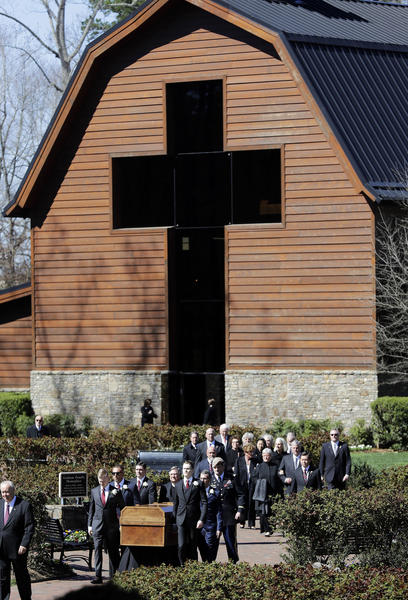