The Catholic Archbishop of Pretoria is praising Judge Masipa's handling of the Oscar Pistorius sentencing.

The athlete is starting his five-year prison sentence for shooting dead his girlfriend Reeva Steenkamp on Valentine's Day last year.

His defence team suggest the Paralympian will spend about ten months in jail and the rest under house arrest.

Reeva's family say they are happy and satisfied with the verdict and are relieved that the case is finally over.

Many have said that the sentence was too lenient, but Archbishop William Slattery, who is also the Catholic bishop for prisons in South Africa, thinks the judge got it right.

Speaking on Premier's News Hour, he said: "Society can't always get what its gut feeling wants. 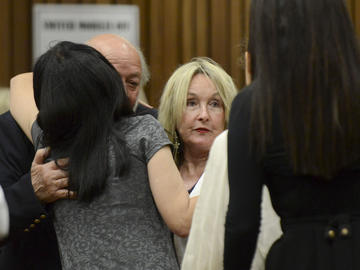 "If there's murders, people say catch them and throw away the keys.

"She is certainly educating the country; we must get beyond this animal instinct, revenge approach."

It is reported that Pistorius cried as the sentence was handed down.

While going through the details, Judge Masipa said he had been receiving mental health support from his church.

The athlete's uncle, Arnold Pistorius, made a statement outside the court in Pretoria after the punishment was handed down.

He said: "We accept the judgement.

"Oscar will embrace this opportunity to pay back to society.

"I would ask you, ladies and gentleman of the media to let us move forward in this process and give us some degree of dignity and privacy as we do so.

"It has been a harrowing 20 months, we are all emotionally drained and exhausted."

Prosecutors had asked for a minimum ten-year prison term, while the defence called for community service and house arrest.

Dr Michael Cassidy, founder of Christian mission ministry African Enterprise is calling for Christians around the world to pray for all those involved in the case.

Speaking on Premier's News Hour, he said: "Pray for the young man himself, that this will be a real rehabilitating time for him in prison and he will recover his equilibrium as a human being.

"We need to pray for his family and the family of Reeva Steenkamp.

"And do pray for us here in South Africa in terms of the huge crime rate that we've got. It's a desperate business."