A prospective Republican Party candidate for the next American president says the population do not care if President Obama is a Christian.

Wisconsin Governor Scott Walker was asked by the Washington Post if he knew whether Barak Obama was a Christian and he replied 'I don't know'.

After being told by journalists that Obama had often professed his faith the governor said: "I've actually never talked about it or I haven't read about that

"I've never asked him that. 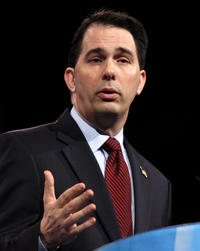 "You've asked me to make statements about people that I haven't had a conversation with about that. How [could] I say if I know either of you are a Christian?"

Mr Walker added that he thought the American public was not interested either way and it was the media that was fixated on the issue of religion.

"To me, this is a classic example of why people hate Washington and, increasingly, they dislike the press," he said.

"The things they care about don't even remotely come close to what you're asking about."

He added: "People in the media will [judge], not everyday people.

"I would defy you to come to Wisconsin. You could ask 100 people, and not one of them would say that this is a significant issue," he said.

A spokesman for Mr Walker later said the governor was making a point by not answering the question and was not casting doubt on President Obama's religion.