It's been revealed that the man who has been accused of opening fire in a US synagogue last Saturday was a churchgoer.

John Earnest has been accused of writing a seven-page manifesto outlining his Christian theology on salvation, as well as his views about Jewish people, claiming that they deserved to die because they killed Jesus.

The 19-year-old, a member of an Orthodox Presbyterian Church (OPC), is believed to have written that his intention to kill Jews would glorify God and encouraged others to follow suit.

One Jewish worshipper was killed in the shooting. A rabbi, a worshipper and a child were also injured at the synagogue in Ponway, California. 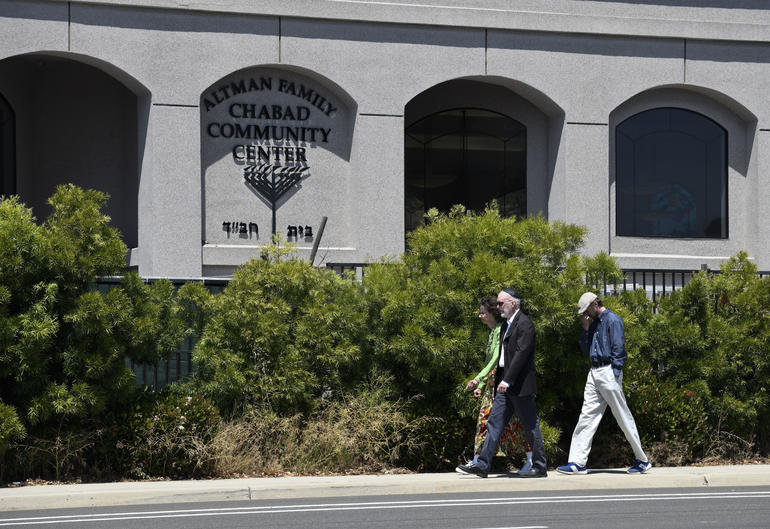 ynagogue members walk outside of the Chabad of Poway Synagogue Saturday, April 27, 2019, in Poway, Calif. Several people were injured in a shooting at the synagogue

According to the Washington Post, Rev Mika Edmondson, a pastor in the Orthodox Presbyterian Church said the letter was shocking and admitted that the church had to take some responsibility for Earnest.

Rev Edmondson condemned the attack and added: "He [Earnest] was radicalized into white nationalism from within the very midst of our church."

The OPC denomination, which was founded in response to the modernisation of Presbyterianism, said in a statement: "Anti-Semitism and racist hatred which apparently motivated the shooter... have no place within our system of doctrine."

The pastor of the church Earnest attended, Escondido Orthodox Presbyterian Church, held a discussion the day following the attack and promised to support the victims and survivors of the tragedy.

Meanwhile, an evangelical pastor said he was troubled over Christians twisting Biblical teachings.

Chad Woolf said in a debate online: "We should recognise that somebody could grow up in an evangelical church, whose father was a leader, and could somehow conflate the teachings of Christianity and white nationalism. We should be very concerned about that."

Earnest's family have said the content of the manifesto does not match their faith or what John believes.