The US Vice President said the South Bend, Indiana mayor "knows better" than to criticise his faith, days after Buttigieg suggested in a speech that Pence may have a problem with him being gay.

"He said some things that are critical of my Christian faith and about me personally," Pence told CNBC.

"And he knows better. He knows me."

Pence served as governor of Indiana when Buttigieg came out as gay during his re-election campaign for mayor.

He argued Buttigieg was trying to rally the liberal left to his side in the hotly contended field for the Democratic presidential nomination. 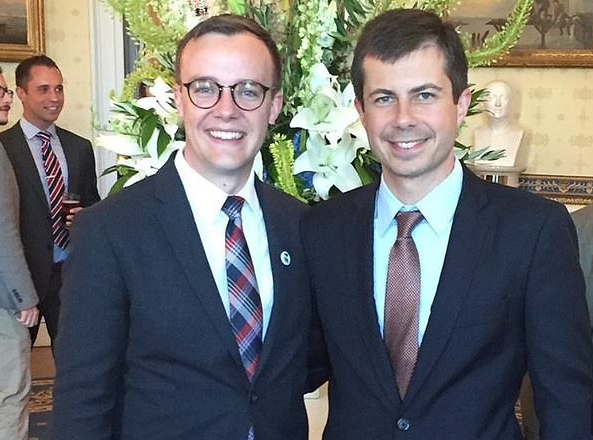 Pete Buttigieg with his husband.

In an interview on CNBC's "Squawk Box " that will air in the US on Thursday morning, Pence added: "But I get it.

"You know, it's...19 people running for president on that side, in a party that's sliding off to the left. And they're all competing with one another for how much more liberal they are."

Pence was responding to comments that Buttigieg made over the weekend during an event hosted by the LGBTQ Victory Fund, a group trying to increase the number of LGBT candidates in American politics.

"I wish the Mike Pences of the world would understand, that if you have a problem with who I am, your quarrel is not with me," Buttigieg said.

"Your quarrel, sir, is with my creator."

The presidential hopeful has since taken to Twitter to write a post that appeared to be directed toward Pence's record on LGBT equality.

People will often be polite to you in person, while advancing policies that harm you and your family. You will be polite to them in turn, but you need not stand for such harms. Instead, you push back, honestly and emphatically. So it goes, in the public square.

"People will often be polite to you in person, while advancing policies that harm you and your family," he tweeted.

While Pence stood by his view of marriage in his interview, he explained: "But that doesn't mean that we're critical of anyone else who has a different point of view."