Carrying bread in a plastic packet and a chalice from his home church, Buzz Aldrin invited the NASA team to take communion with him.

The astronaut was also an elder at Webster Presbyterian Church in Houston, Texas, and had asked if he could celebrate Jesus' death and resurrection over the radio.

However, NASA were wary after atheist activist Madalyn Murray O'Hair sued NASA for compromising the separation of church and state by reading the creation account in Genesis on the Apollo 8 trip a year ealier.

The event therefore wasn't broadcast, except to the NASA team who could listen in.

Aldrin planned to take communion as close in time as possible to his church family back home in Houston and had been given a light silver cup by his pastor, Dean Woodruff.

He had also written John 15:5 on a piece of paper and described the moment in an article for Guideposts magazine in 1970:

"So I unstowed the elements in their flight packets. I put them and the scripture reading on the little table in front of the abort guidance system computer.

"Then I called back to Houston.

He continued: "In the radio blackout I opened the little plastic packages which contained bread and wine.

"I poured the wine into the chalice our church had given me. In the one-sixth gravity of the moon the wine curled slowly and gracefully up the side of the cup. It was interesting to think that the very first liquid ever poured on the moon, and the first food eaten there, were communion elements."

Webster Presbyterian Church still celebrates their connection with the moon landing every year on the nearest Sunday, with the event description for Sunday 21st reading: "On July 20, 1969, the people of WPC read Psalm 8 and took communion in solidarity with the Apollo 11 crew.

"People everywhere, looking up at the vastness of the heavens in awe of its Creator and Source, ALL came together, and somehow the vastness seemed smaller. God, to many, seemed somehow closer. Each one seemed an integral part of a much bigger whole. Distance drew people near; expansiveness highlighted smallness; focused on this, the world itself seemed to converge."

"And so, just before I partook of the elements, I read the words, which I had chosen to indicate our trust that as man probes into space we are in fact acting in Christ.

"I sensed especially strongly my unity with our church back home, and with the Church everywhere.

I read: 'I am the vine, you are the branches. Whoever remains in me, and I in him, will bear much fruit; for you can do nothing without me'" 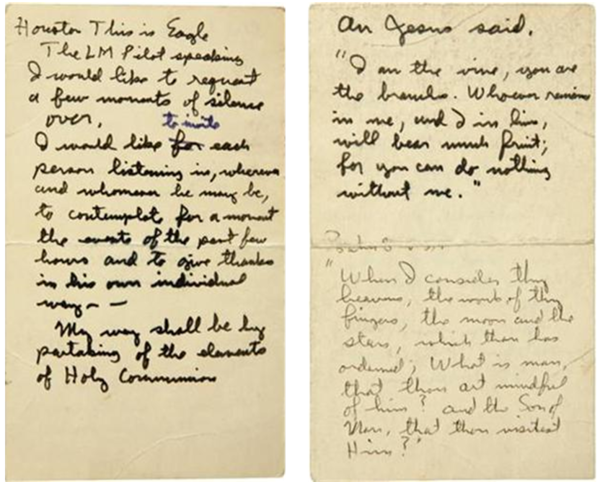