Joanna Duka and Breanna Koski own Brush & Nib Studios, a specialist hand-painting company in Phoenix which creates artwork for big life events, such as wedding invitations.

They talk about their love of God on their website, saying that meeting each other was 'a God thing'.

The city of Phoenix wanted to enforce an 'ordinance' which would prohibit anyone offering services (such as a business) discriminating against another based on their status in a 'protected' group, including someone's sexual orientation.

The Christian women weren't accused by the state but started the case themselves to prevent the ordinance being used against them in the future.

They wanted the right to have a statement on their website that explained that they would "not create any artwork that violates our vision as defined by our religious and artistic beliefs and identity."

It lists several examples of objectionable artwork, including artwork promoting businesses that "exploit women or sexually objectify the female body", "exploits the environment", or "any custom artwork that demeans others, endorses racism, incites violence, contradicts our Christian faith, or promotes any marriage except marriage between one man and one woman," such as "wedding invitations for same-sex wedding ceremonies."

The city wanted to dismiss this request.

It's now been ruled that the City of Phoenix cannot force Joanna Duka and Breanna Koski to create custom wedding invitations celebrating same-sex wedding ceremonies in violation of their sincerely held religious and that they have the right to refuse to express such messages under article 2, section 6 of the Arizona Constitution, as well as Arizona's Free Exercise of Religion Act. 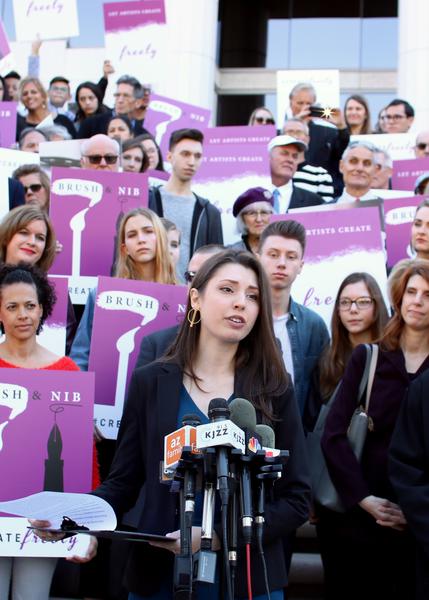 The ruling acknowledged their Christian faith, saying that their business involves custom-made artwork and working with their client couples and that designing an invitation that celebrated same-sex marriage would violate their beliefs.

The ruling also explained that the "Plaintiffs assert they will serve all customers, regardless of their sexual orientation. However, they refuse to create or express certain messages, regardless of who makes the request."

Justice Gould of the Supreme Court ruled: "The rights of free speech and free exercise, so precious to this nation since its founding, are not limited to soft murmurings behind the doors of a person's home or church, or private conversations with like-minded friends and family. These guarantees protect the right of every American to express their beliefs in public.

"This includes the right to create and sell words, paintings, and art that express a person's sincere religious beliefs."

The justice also said: "Duka and Koski's beliefs about same-sex marriage may seem old-fashioned, or even offensive to some. But the guarantees of free speech and freedom of religion are not only for those who are deemed sufficiently enlightened, advanced, or progressive. They are for everyone. After all, while our own ideas may be popular today, they may not be tomorrow."

The court concluded that the city's ordinance "unconstitutionally compels speech" of Brush and Nib Studio's owners and would have substantially burdened their freedom of religion.

They therefore can legally refuse to make invitations for same-sex weddings and say so on their website.