There have been reports that among the 2 million people gathered in Hong Kong to protest on Monday, many used the opportunity to sing a worship song.

There has been days of demonstrations in the city over a planned extradition bill that would have allowed suspects to be extradited from Hong Kong to mainland China.

Hong Kong's leader Carrie Lam on Sunday apologised for proposing the bill which has since been suspended but the unrest has grown with protesters demanding she resigns.

Karen Chu is a Christian and a student at Hong Kong University.

She told Premier that many Christians have been involved with the demonstrations.

"I actually haven't gone out to protests at all, just because for me I decided that I want to just pray in my own time and in my own space, but there has been a lot of Christians that went to protest, which...I guess has not been seen before," she explained.

You seen what's happening in #HongKong? The unofficial anthem of the vast crowds protesting against new extradition laws is 'Sing halelujah to the Lord'. One newspaper says it feels more like a vast prayer meeting than a political protest. Maybe its both #prayforHK
??John Malcolm pic.twitter.com/HtSF7vOh1T

She validated reports of "the unofficial anthem" of the vast crowds protesting.

"Churches and a lot of Christians have been organising themselves to go out to the places where people are protesting to pray," Chu said.

"They kept singing that song - Sing Hallelujah to the Lord. I think they sang it for, like, 10 hours during the protest last week."

She said this had a knock-on effect on how people view Christian's interaction with politics in Hong Kong. 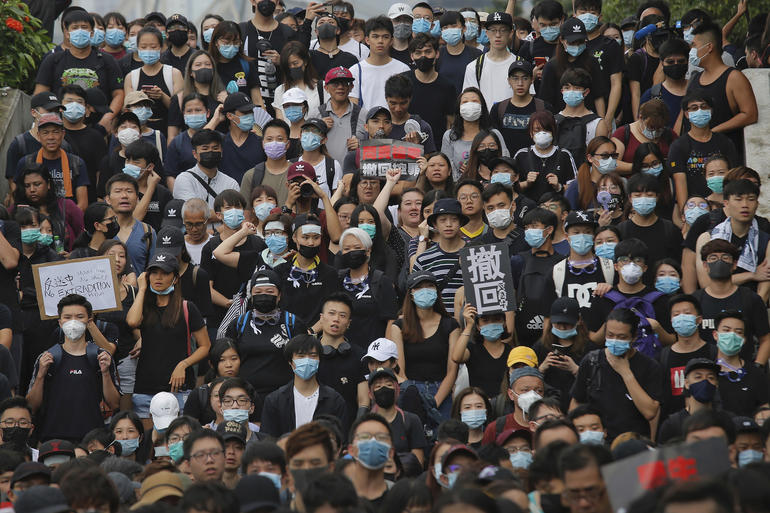 Meanwhile, Joshua Wong, who is Hong Kong's most prominent student activist, has been released from prison, after serving a two-month sentence related to demonstrations in 2014.

Activists and striking students gathered outside Hong Kong's Legislative Council to listen to Wong share his "regret" after not being able to participate in Sunday's protest.