Short-circuit 'most likely cause' of Notre Dame blaze

Investigators think an electrical short-circuit was the most likely cause of the Notre Dame Cathedral fire, according to a French judicial police official.

The official said investigators still do not have the green light to work in the cathedral and search in the rubble for safety reasons.

He said the monument is still being consolidated with wooden planks to support some fragile parts of the walls.

The probe was taking place as France paid a day-long tribute to the Paris firefighters who saved the famous cathedral from collapse and rescued its treasures.

The tributes came as construction workers rushed to secure an area above one of the church's famed rose-shaped windows and other vulnerable sections of the fire-damaged landmark.

President Emmanuel Macron held a ceremony at the Elysee Palace to thank the hundreds of firefighters who battled the fast-moving fire at Notre Dame for nine hours, preventing the structure's destruction and rescuing many of the important relics held inside.

"We've seen before our eyes the right things perfectly organised in a few moments, with responsibility, courage, solidarity and a meticulous organisation", Mr Macron said. "The worst has been avoided."

Mr Macron said the firefighters will receive a medal for their courage and devotion.

The huge cathedral, including the spire that was consumed by flames and collapsed, was in the initial stages of a lengthy restoration. 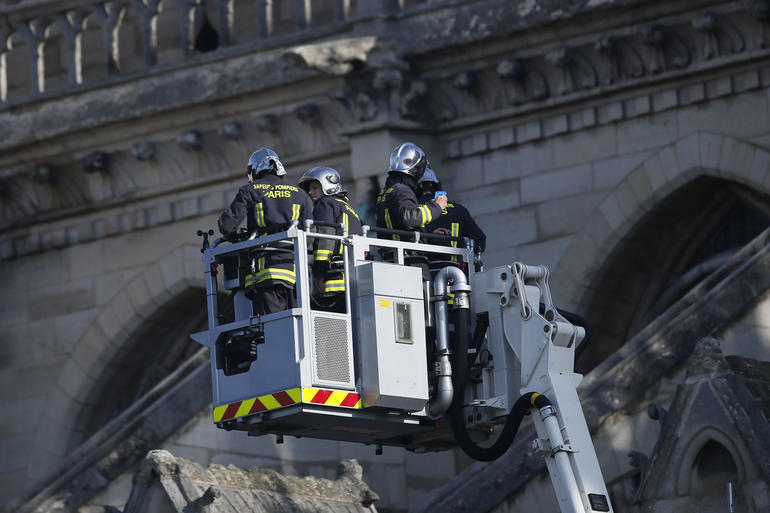 Police, citing "important risks" of collapse and falling objects, officially closed a large swathe of the island in the Seine River on which Notre Dame sits. The area had been unofficially blocked off since the fire.

Workers using a crane were removing some statues to lessen the weight on the cathedral's fragile gables, or support walls, and to keep them from falling, since the section lacked the support of the massive timber roof that burned in the devastating blaze.

They were also securing the support structure above one of Notre Dame's rose windows with wooden planks.

Remarkably, no one was killed in the fire, which began during a Mass, after firefighters and church officials speedily evacuated those inside.

Among the firefighters honoured was Paris fire brigade chaplain Jean-Marc Fournier, who said he was falsely credited with helping salvage the crown of thorns believed to have been worn by Jesus at his crucifixion.

The chaplain said a team of rescuers broke the relic's protective covering and an official who had the secret code to unlock the protection finished the job. 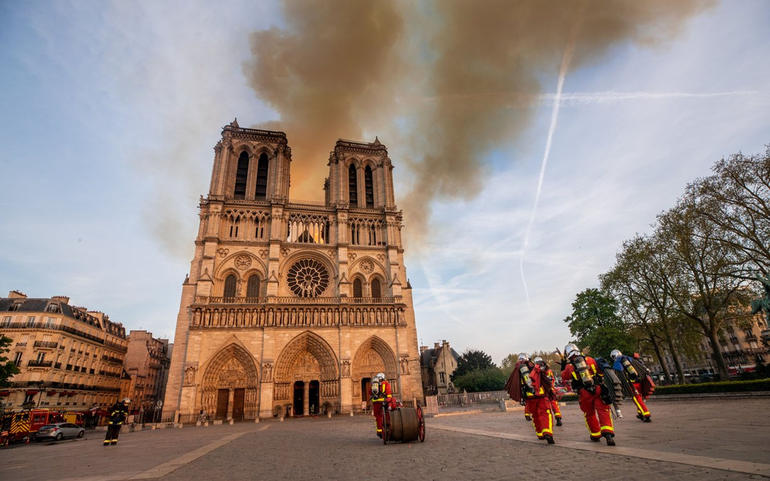 Among others honoured was Myriam Chudzinski, one of the first firefighters to reach the roof as the blaze raged.

Loaded with gear, they climbed hundreds of steps up the cathedral's narrow spiral staircase to the top of one of the two towers. She had trained at the site for hours for just this moment.

"We knew that the roof was burning, but we didn't really know the intensity," she told reporters. "It was from upstairs that you understood that it was really dramatic. It was very hot and we had to retreat, retreat. It was spreading quickly."

Investigators so far believe the fire was accidental, and are questioning both cathedral staff and workers who were carrying out renovations. Some 40 people had been questioned by Thursday, according to the Paris prosecutor's office.

The building would have burned to the ground in a "chain-reaction collapse" had firefighters not moved as rapidly as they did to battle the blaze racing through the building, said Jose Vaz de Matos, a fire expert with France's Culture Ministry.

Mr Macron wants to rebuild the cathedral within five years - in time for the 2024 summer Olympics that Paris is hosting - but experts say the vast scale of the work to be done could easily take 15 years, since it will take months, even years, just to figure out what should be done.