Christian campaigners urged the Rugby Football Union (RFU) to "confirm that it is willing to engage players who agree with this view about marriage" following disciplinary action against Billy Vunipola.

Mr Vunipola was sanctioned by his club earlier this month after he defended comments made by fellow Christian rugby star Israel Folau, who said "hell awaits" homosexuals unless they repents.

The Saracens player wrote about Folau: "What he's saying isn't that he doesn't like or love those people. He's saying how we live our lives needs to be closer to how God intended them to be.

"Man was made for woman to pro create. That was the goal, no?"

In a letter to the RFU, director of the Christian Institute, Colin Hart said the belief that sex is only for heterosexual marriage was "worthy of respect in a democratic society".

Vunipola "holds to the Easter message of hope that sins can be forgiven through trusting in Christ's death on the cross and his resurrection from the dead".https://t.co/BbRDhLqzZu

The note, addressed to head of discipline at the RFU, said: "Vunipola believes himself to have fallen short of God's standards.

"He holds to mainstream Christian teaching that 'all have sinned and fall short of the glory of God' (Romans 3:23).

"He holds to the Easter message of hope that sins can be forgiven through trusting in Christ's death on the cross and his resurrection from the dead." 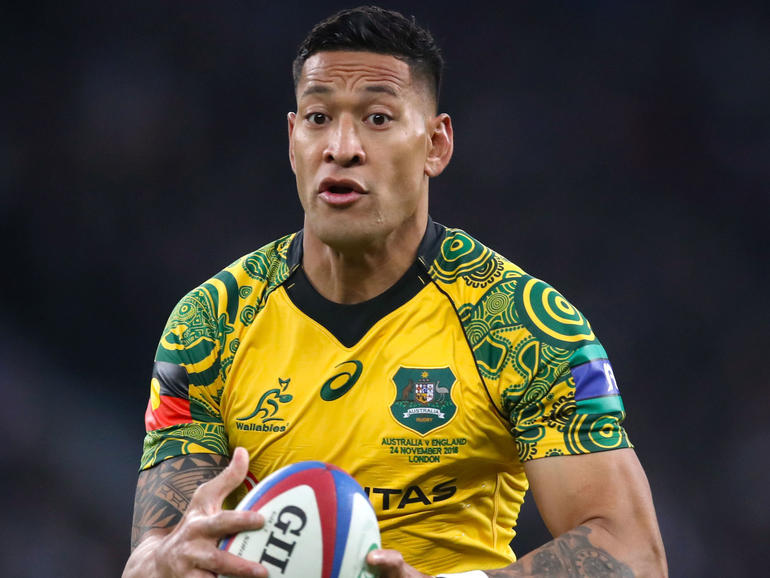 Folau is currently challenging the decision by Rugby Australia to terminate his contract after it concluded his comments were "disrespectful to people because of their sexuality".

The Northampton Saints rugby player said "opinions like that are ridiculous" in a video posted on his Facebook page earlier this month.

Colin Hart said: "[Haskell] then followed up calling the texts of all religions 'out dated', asserting that Folau's interpretation is a road map to killing, and singling out 'some team mates' for scorn. Hardly moderate.

"Does the RFU propose to take no action against Haskell?"