The Most Rev Justin Welby, the figurehead of the worldwide Anglican Church, told interfaith leaders in Sri Lanka that accepting responsibility is key rather than disavowing an extremist.

Mr Welby arrived in Sri Lanka on Thursday and first visited St Sebastian's Church near the town of Negombo to pay homage to those killed in the Easter suicide bomb attacks blamed on extremist Muslim groups.

On Friday, he told religious leaders that discussion among faiths has become more difficult in the last 30-40 years and in every faith, including in Christianity, extremist attitudes have grown. 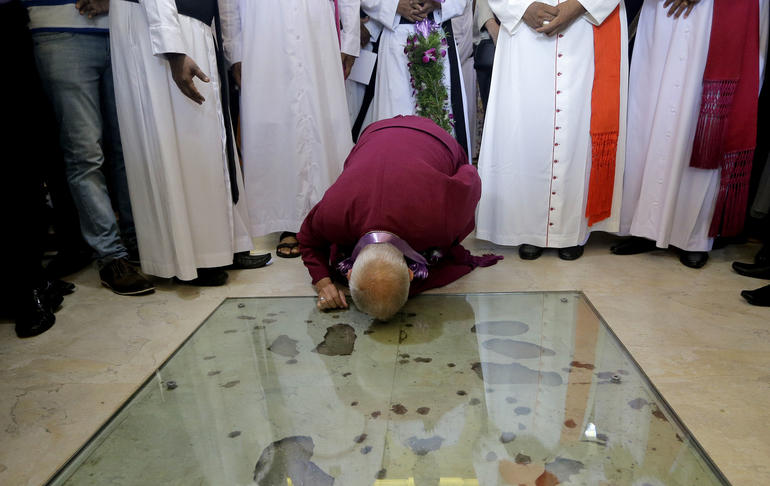 "It is the duty of every religious tradition, for its leaders, to resist extremism and to teach peaceful dialogue," he said.

"So the first challenge to all of us is take responsibility.

"If a Christian does something evil, it is not for me to say 'well they are not a real Christian'. I have to ask myself 'what is within my faith tradition, our historic teaching, that makes it easy for them to do that?'

"The second challenge in dialogue is honesty. Dialogue is where we are honest, where we open the door of our heart and say it is this that frightens me about you or this that I disagree with you about.

In the Easter attacks, more than 260 people died in six co-ordinated bombings of churches and hotels.

Seven suicide bombers from two local Muslim extremist groups who had pledged allegiance to Islamic State carried out the attacks, which also left some 500 people injured.

Other suspects killed themselves by exploding bombs, some with their families, as police and military closed in.

Islamic clerics expressed outrage at the attacks and did not allow the suicide bombers and those who killed themselves to avoid capture to be buried in Islamic burial grounds, having declared that they do not belong to the Muslim faith. Their children were buried with Islamic rituals.