Record numbers of visitors and worshippers flock to England's cathedrals

England's cathedrals reported nearly ten million visitors in 2018, an increase of over 10 per cent on the previous year. There were additionally over a million

Cathedrals have witnessed their highest Easter congregation numbers in recent years, while visitor numbers increased by a million on the previous year, according to new figures published today.

The major Christian festivals remain at the heart of congregational growth, with 58,000 people attending a cathedral at Easter and 95,000 during Holy Week – the highest numbers recorded for a decade, with Easter attendance up nearly 10,000 since 2008.

Meanwhile numbers at Christmas and Advent services rose five per cent on the previous year to reach 750,000 in 2018.  There were 133,000 people worshipping in cathedrals on Christmas Eve and Christmas Day – second only to the previous year's record high.

Cathedrals reported a total of 37,000 people worshipping each week in the year 2018, marking an increase of around 14 per cent over the past ten years. Around one in five cathedral worshippers was under the age of 16, also an increase on the previous year.

Attendance at midweek services, including choral evensong, grew 34 per cent in the ten years to 2018, with nearly 19,000 attending each week. More people attended midweek services than on Sunday for only the second time since records began.

Music in Cathedrals continues to flourish with 2,000 full-time choristers and 1,800 voluntary choir members.
Cathedrals also welcomed the highest ever number of children and young people for educational events. In 2018, 340,000 young people from nursery through to 18+ attended events at cathedrals and at Westminster abbey. Third Estates Commissioner, Dr Eve Poole, who leads the Church of England's Cathedrals Support Group, said: "We are proud that our cathedrals are a precious resource not only for the church but for the nation as well.
"We know from countless anecdotes that many who visit as tourists encounter something deeper, and cathedrals have been imaginative in creating more opportunities for people from all walks of life to cross their thresholds.

"The story behind these encouraging figures is of cherished buildings led by armies of dedicated staff and volunteers, who each year tell afresh in words, worship, music and light, the stories enshrined in these stones, which are the stories of our nation too."

Cathedrals continued to play a key civic role, with Remembrance services drawing in additional numbers for the centenary of the First World War Armistice.
In Spring 2018 over 196,000 people visited Hereford for Cathedral to see Poppies: Weeping Window, an exhibition by artist Paul Cummins and designer Tom Piper featuring poppies previously seen at the Tower of London. Dean of Hereford, Michael Tavinor, described the event as being of great significance.

"The reactions of the many thousands, young and old, were as varied as the locations they travelled from, but a common experience seems to be one of remembrance, thanksgiving, regret and beauty," he said.

Elsewhere, Peterborough Cathedral welcomed over 170,000 visitors in the space of three months following the arrival of Tim Peake's Soyuz space capsule. Dean of Peterborough, Chris Dalliston, said the Soyuz spacecraft had "not only attracted large numbers of visitors, but also prompted questions about the relationship between science and faith and humanity's place in the universe."

Norwich Cathedral witnessed an increase of 65 per cent in Easter and Holy Week worshippers between 2014-18, with nearly 4,500 worshippers attending last year. Dean of Norwich, Jane Hedges, welcomed the trend, saying: "We are delighted that an increasing number of people are celebrating with us the heart of the Christian faith: that Christ is risen! 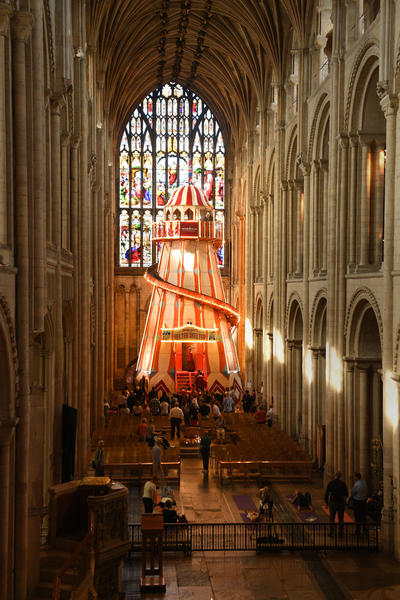 "Many different factors draw people to the Cathedral, including our engagement with the wider community and activities and events throughout the year, and above all, the quality of worship that we are able to offer."
Andrew Nunn, Dean of Southwark, which also saw a rise during the same period (56 per cent) cites an annual Lent art installation as helping people to engage in the life of the Cathedral on London's Southbank, contributing to more than 2,500 attending for Easter and Holy Week worship in 2018.

"We have been striving for openness and inclusion to all the communities in London as well as excellence in liturgy, worship and music," he said.
"Christmas celebrations have an understandable cross community appeal, but there is something about Holy Week and Easter that appeals to those who are more committed as Christians."

Another cathedral noticing significant Easter and Holy Week increased was Leicester, where a 136 per cent increase was recorded over the four-year period, with nearly 4,000 attending during the Holy Week and Easter period in 2018.
Dean of Leicester, David Monteith, said there had been no single factor behind the increase, but that the cathedral had improved publicity, developed hospitality, invested in music and built relationships across the city and county.
"We are increasingly trusted to offer worship which is inspirational and inclusive; it is both 'classic cathedral' yet imaginative and challenging," he said.

"We draw from the riches of our faith directing us to God and yet we address the lived experience of our people today."
Other cathedrals have run events specifically to draw in the local community, including a special community evensong event at Southwell Minster, and a 'Freshers' Fair' event in Wells Cathedral, where visitors found out about local volunteer organisations; groups and activities. A local film company created a soundscape for the event to imagine what the city of Wells might be like in the future.

Dean of Wells, Dr John Davies, said the event had inspired various other initiatives, including an abseil which raised over £60,000 for charity.

"The event, Wake up Wells, was a wonderful example of Cathedral and Community overlapping and cooperating," said the Dean.

"I had more letters of thanks afterwards than after any other event.  People felt a real sense of welcome and belonging." Many cathedrals participated in the Church of England's Advent and Christmas campaign promoted by the Archbishops of Canterbury and York, #FollowTheStar, which saw nearly 2,000 attending special Lumiere events at Durham and Canterbury Cathedrals. The campaign, which runs again in 2019, encourages more people to attend churches and cathedrals at Christmas time, finding local services and events on achurchnearyou.com.

Next year, 2020, will see new pilgrimage routes opened-up as part of Year Cathedrals; Year of Pilgrimage, a project in collaboration between the British Pilgrimage Trust and the Association of English Cathedrals. The initiative will ensure there is a one-day pilgrimage route for every Church of England Cathedral, in addition to a group of six new trails in the north east.

Adrian Dorber, Dean of Lichfield and Chair of the Association of English Cathedrals, described the latest statistics as pleasing, but warned against complacency.

"We continue to try and find ways that offer spiritual nurture and hospitality to people who have never had much contact with the Church or with organised religion," he said.

"There is a place for a creative interpretation of big events and anniversaries - whether that's the Armistice, Easter, Advent or the Moon Landing - and by opening up our great sacred spaces for such encounters, it opens up opportunities for new conversations and new dialogues; it welcomes, it challenges, it engages our communities and allows us to reach new audiences and that says something about cathedrals being a place for all, and a place for fresh encounter."