The Queen has paid tribute to members of the Royal Army Chaplains' Department, calling them an "integral part of the well-being of our armed forces".

The Queen, who is their patron, wrote to them as part of a service to celebrate 100 years since the department was granted the prefix "Royal".

Formed in 1726, the department was given the title by her grandfather, King George V, on February 22 1919 in recognition of their "outstanding service and sacrifice" during the First World War, her letter read.

Reflecting on this sacrifice, the Queen wrote: "They have remained quietly dedicated and steadfast in their calling, providing spiritual support, moral guidance and pastoral care to all soldiers, wherever they serve."

Arriving at the Guards' Chapel in Wellington Barracks, Westminster, on Friday, the Queen, wearing a royal blue tweed coat and matching hat by Angela Kelly, was met by cheering crowds who had gathered in the sunshine.

She was welcomed by Reverend Stephen Dunwoody, senior Chaplain for London, and the Chaplain-General, the Venerable Clinton Langston. 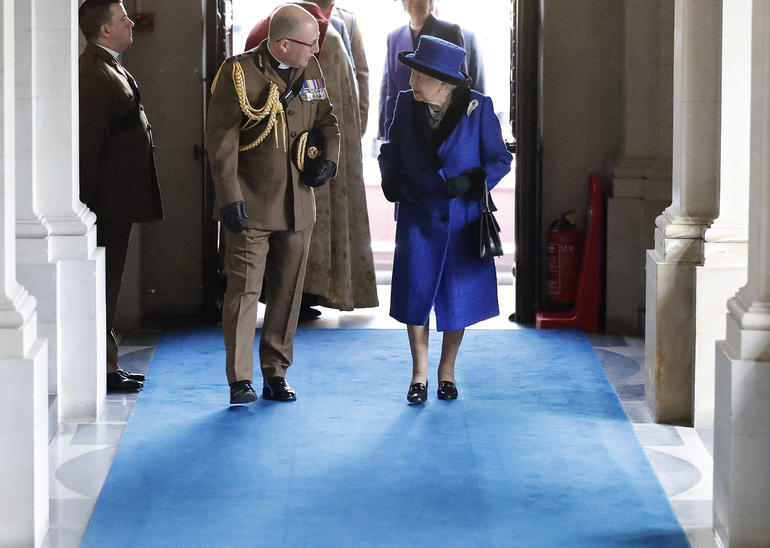 The band of the Grenadier Guards played a military fanfare as she entered the chapel and followed the procession down the aisle.

Army chaplains are professionally qualified officers who wear the British Army uniform and travel overseas with units, but as non-combatants they do not bear arms.

They depict sacrifice, engagement and service, aspects which reflect chaplaincy over the last 100 years. 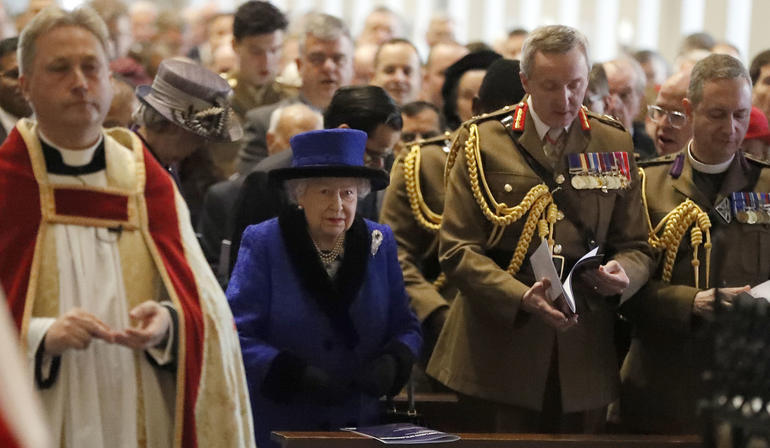 The artist, Harry Parker, served in Iraq and Afghanistan with the Rifles Regiment and lost both his legs while on active duty in 2009.

He said: "I hope she liked them. She asked me what I was up to and I told her I was painting and writing and she said 'Well done', which was really nice.

"It's a real honour to be asked to do the paintings anyway, and for the Queen to see them was really special."

While serving in Iraq and Afghanistan, Mr Parker said the chaplains were "always such an amazing reassuring presence around the camp".

He added that the service "really had a special feel" because the Queen attended. 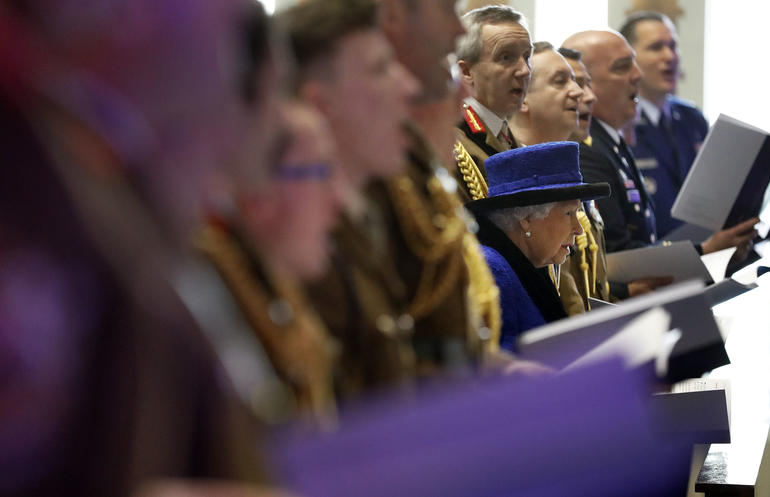 The Queen then greeted serving and former chaplains including the most recent recruit, known as the "youngest" chaplain, Mike Rutter.

He said: "It's just (a) wonderful occasion and, I'll be honest, my knees did give away a little bit. It was lovely, such an honour. One of those moments in life that I'll never forget."

During the service, extracts from chaplains' diaries were read, including one kept by Reverend Maurice Murray, who ministered to soldiers during the Great War.

Commenting on burying soldiers while in the trenches, Rev Murray said crosses for graves were made from "reverting timber or two pieces of iron tied together with telegraph wire".

All serving chaplains were then asked to reaffirm their "commitment and rededicate themselves in service" to the department.

Chaplains around the world also paused at the hour to join the re-dedication in an "act of global unity".

There are currently 129 regular and 49 reserve serving chaplains, five of whom are serving overseas, Army London said.