Prayers for teenager stabbed near church

A church in east London has said it's praying for a teenager that was stabbed in a park near the church.

Three people have been arrested.

The Metropolitan Police said officers were called to North Street in Barking, east London, at 7.24pm on Monday following reports of a stabbing.

Police and the London Ambulance Service rushed to the scene, near Barking Abbey Grounds, where they found a male, believed to be 17, suffering from a stab wound.

The teenager was taken to hospital, where his condition is believed to be life-threatening, the Met added.

One witness told the PA news agency that three people in hoodies had been seen fleeing the scene in a car moments after the attack.

The woman, who wished to remain anonymous, said the teenage victim was a black male who is believed to live locally.

She added: "There was a group of youths around here, then three of them ran across the road and, literally 30 seconds later, ran back and jumped in a car.

"The police turned up, there was a young lad on the floor. They had stabbed him in the stomach.

"Then they had the blatant cheek to come back and watch. They literally walked over and stood there, seeing the people working on this kid.

"Then they walked back and got back in car, laughing their heads off.

"That was what shocked me more - that they had the cheek to come back." 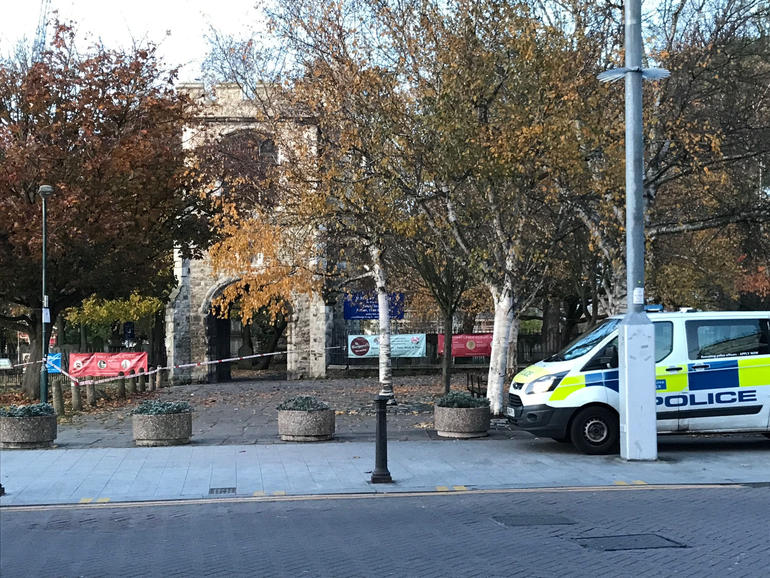 A police cordon in Barking, east London, where a 17-year-old boy was stabbed on Monday, leaving him with life-threatening injuries.

A police cordon manned by uniformed officers was in place around a large area of the park between St Joseph's Primary School and St Margaret's Church on Tuesday morning.

"Our thoughts and prayers are with both the young man who was the victim of a knife attack last night, and his family and friends."

Three people have been arrested in connection with the incident and remain in custody, the force said.