Pope Francis tended to the needs of Thailand's tiny Catholic hierarchy, urging priests and nuns to find ways to communicate the faith with "a Thai face and fles

Thousands of Thais welcomed Francis as he travelled to St Peter's Parish, a Catholic community outside Bangkok, to pray at the sanctuary of Thailand's first martyred priest.

There, he told a few hundred priests and nuns that he read "with some pain" that for many Thais, Christianity is "a religion for foreigners".

He said: "This should spur us to find ways to talk about the faith in dialect, like a mother who sings lullabies to her child.

"With that same intimacy, let us give faith a Thai face and flesh, which involves much more than making translations."

Children dressed as monks and nuns, as well as real-life religious and ordinary Catholics, cheered him as he passed through the crowd outside the church in his Popemobile and later on foot.

It is the first time in a generation that Thais have seen a Pope up close, after John Paul II became the first pontiff to visit Thailand in 1984.

Pornnutcha Kruprasert, a 14-year-old training to be a nun from southern Prachuap Khiri Khan province, said she was "excited and delighted" to see the Pope.

"The Pope always has good thoughts for all youths," she said cheerfully. "We can bring his teachings into real life." 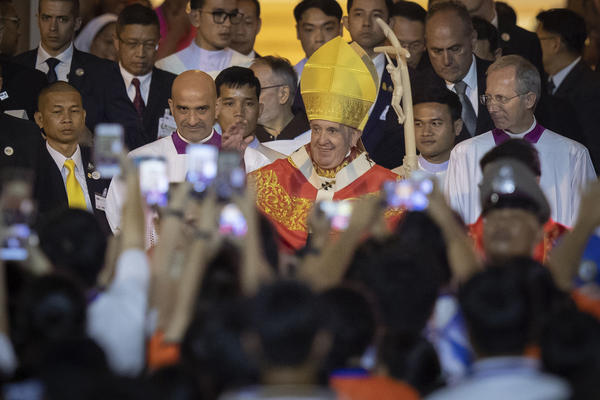 After meeting with clergy and nuns, Francis met with members of his own Jesuit order and bishops from across Asia to encourage them to spread the faith as their missionary predecessors did.

On Friday afternoon, he attended an interfaith encounter to highlight care for the poor and the environment as areas where Catholics can co-operate with Buddhists, Muslims and members of other Christian denominations.

"All of us are called not only to heed the voice of the poor in our midst: the disenfranchised, the downtrodden, the indigenous peoples and religious minorities, but also to be unafraid to create opportunities... to work hand in hand," he said.

"For our part, we are asked to embrace the moral imperative of upholding human dignity and respecting the rights of conscience and religious freedom."