Pope Francis has praised Morocco as a model of religious moderation and migrant welcome as he visited the north African kingdom.

King Mohamed VI welcomed Francis as he arrived in Rabat during an unusual rainstorm and began a 27-hour visit aimed at boosting Christian-Muslim ties and showing solidarity with Morocco's ever-growing migrant community.

Morocco last year became the main destination for sub-Saharan African migrants seeking to reach Europe via Spain. The influx has strained the kingdom's resources and fuelled anti-migrant sentiment in Spain.

After an airport greeting, the two leaders took separate vehicles - Francis in his pope-mobile and the king in a Mercedes with a retracted roof - and paraded in tandem into town for a formal welcome ceremony at the Hassan Tower complex, where two of Morocco's past monarchs are buried.

Francis told the king that he hopes Morocco will continue to be a model of humanity, welcome and protection for migrants.

He said: "The issue of migration will never be resolved by raising barriers, fomenting fear of others or denying assistance to those who legitimately aspire to a better life for themselves and their families."

He called for a change of attitude towards migrants that respects them as people, worthy of dignity and rights, and not just statistics. 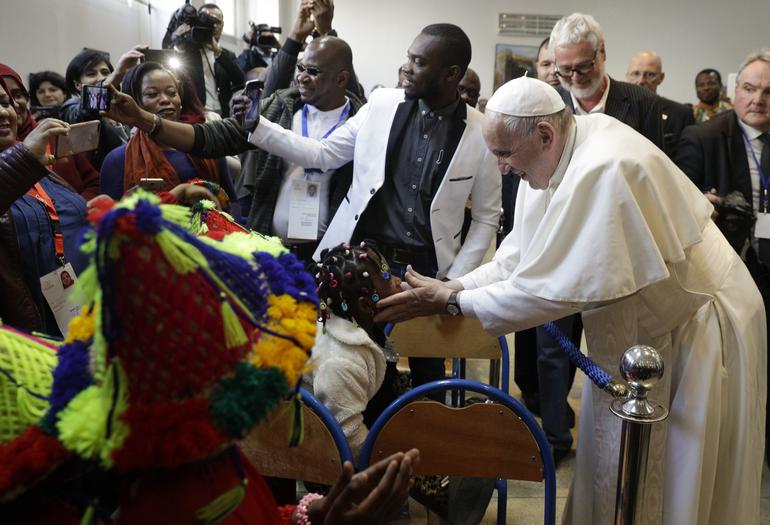 He said world leaders must address the economic imbalances and unrest on Earth that fuel conflicts and migration flows.

"Today's grave migration crisis represents an urgent summons for concrete actions aimed at eliminating the causes that force many people to leave country and family behind, often only to find themselves marginalised and rejected," he said.

Many sub-Saharan migrants in Morocco head north with the aim of crossing the Strait of Gibraltar to Spain or climbing over high fences to reach Spain's
North Africa enclaves of Ceuta and Melilla.

Those who make it across the 20ft fences head for crowded migrant accommodation centres from where they are eventually repatriated or let go. 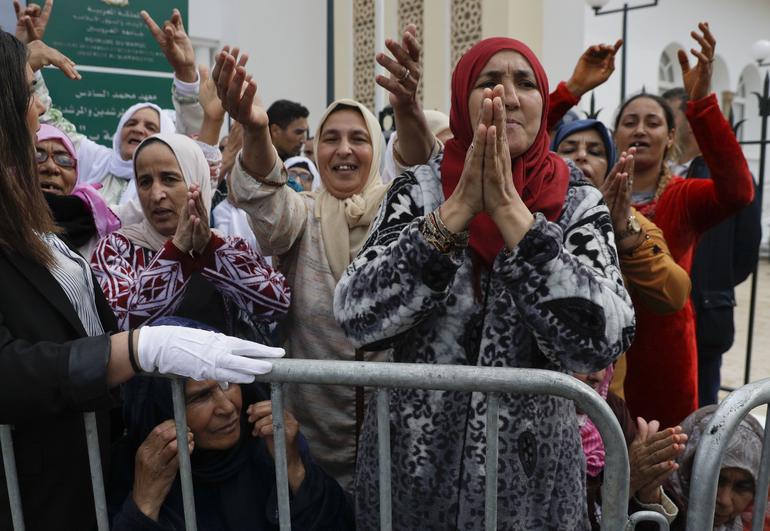 Francis has made the plight of refugees a hallmark of his papacy, and has used many of his foreign visits to insist on the need to welcome them, protect them and integrate them into society.

Spain became the leading migrant entry route into Europe last year with more than 57,000 unauthorised arrivals, according to the European Union.

Nearly 2,300 people died crossing the Mediterranean Sea last year and more than 310 have already died this year on the dangerous journey, according to the International Organisation for Migration. Francis opened his remarks to the king by praising Morocco's tradition of interfaith co-existence and its efforts to promote a moderate form of Islam.

Morocco, a Sunni Muslim kingdom of 36 million, reformed its religious policies and education to limit the spread of fundamentalism in 2004, following terrorist bombings in Casablanca in 2003 that killed 43 people.

Key to that effort has been the Mohammed VI Institute, a school of learning for imams that teaches a moderate Islam and exports it via preachers to Africa, the Middle East and Europe.

Francis praised the school, saying it "seeks to provide effective and sound training to combat all forms of extremism, which so often lead to violence and terrorism, and which in any event constitute an offence against religion and against God himself".

The king said education is the key to fighting radicalism - not military crackdowns.

"What all terrorists have in common is not religion, but rather ignorance of religion," he said.