Francis received a raucous welcome at both a medical centre specialising in Aids treatment and a rain-soaked sports stadium full of singing and dancing followers.

At the Mass, Francis urged an estimated 60,000 Mozambicans to continue on the path of post-civil war reconciliation.

But he warned of the dangers of corruption and the injustices committed when public officials claim to help the poor but have personal interests at heart.

"Mozambique is a land of abundant natural and cultural riches, yet paradoxically, great numbers of its people live below the poverty line," Francis told the faithful at Mass in the Zimpeto stadium.

"And at times it seems that those who approach with the alleged desire to help have other interests. Sadly, this happens with brothers and sisters of the same land, who let themselves be corrupted."

Mozambique is ranked among the most corrupt countries by Transparency International, which cites recent estimates that corruption cost Mozambique some 4.9 billion dollars from 2002-2014.

More recently, Mozambique plunged into financial crisis in 2016 after a scandal came to light involving some 2 billion dollars in undisclosed government-guaranteed loans that were ostensibly meant to acquire fishing vessels but instead went to three state security services to buy weapons. 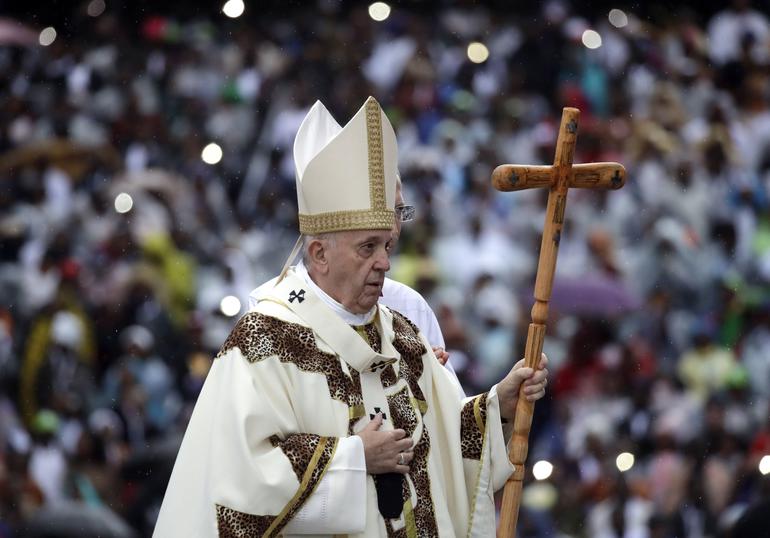 Pope Francis arrives at Zimpeto Stadium where he will celebrate a Holy Mass, in Maputo, Mozambique, Friday, Sept. 6, 2019.

The International Monetary Fund and other international donors stopped providing aid to Mozambique after learning of the concealed loans, setting off a debt crisis.

A former foreign minister is awaiting extradition to the US to face charges in the scandal.

Francis appeared to refer to the scandal in his homily when he referred to corrupt public officials, saying: "It is very dangerous to think that this is the price to be paid for foreign aid."

Francis has frequently denounced corruption during his foreign trips, insisting that political leaders must always put the common good of their people before their own personal interests.

He has frequently urged young people in poor countries in particular to resist the temptation of taking bribes and kickbacks.

Before the Mass, Francis met HIV-infected mothers and children at the Zimpeto medical centre on the northern outskirts of the capital, Maputo.

It is the latest to be opened by the Sant'Egidio community, a Rome-based charity that helped broker Mozambique's 1992 peace accord and then launched a comprehensive Aids initiative to provide anti-retroviral therapy to infected Mozambicans.

Many of them are pregnant women who received therapy to prevent transmission to their unborn children.

According to the World Health Organisation, sub-Saharan Africa remains the most severely affected region, with one in 25 adults living with HIV, more than two-thirds of the global total.

In Mozambique last year, 2.2 million people were living with HIV, 60% of them women, according to UNAIDS.