Nabeel Qureshi's wife reveals she prayed for his resurrection

In a vlog titled "A more glorious end", Michelle Qureshi opened up about feeling led by the Holy Spirit to pray for her husband to rise again.

In the 20 minute post she said: "For seven days I was wrestling, praying for his resurrection."

She also said she felt led to pray for this as one of the four things Jesus sent out the 72 disciples to do was "raise the dead".

The 34-year-old father of a two-year-old daughter, who belonged to Ravi Zacharias International Ministries (RZIM), died earlier this month after being diagnosed with stomach cancer.

Mrs Qureshi said she has "chosen not to burden myself" with the terms 'widow' or 'single-mum'.

Reflecting on her prayer not being answered she said: "I think about Jesus in the garden in Gethsemane and he's praying, sweating drops of blood in earnest praying out to God the father, giving him his desires...but your will be done.

"It's not that God didn't listen to Jesus in the garden, it's that his bigger plan was to make Jesus' torturous death on the cross the most beautiful turning point in history...it's not beyond God to use death for his greater purposes."

When she watched a bulldozer put the final bit of earth over her husband's grave, she made up her mind that she would stop praying for his resurrection as his body was now buried.

She went on to say: "This thought came to me 'that I am fully convinced that God will use this death through a more glorious end than we would have seen if Nabeel were still alive.

"Nothing has changed about God's character...the whole reason we exist is to bring him glory." 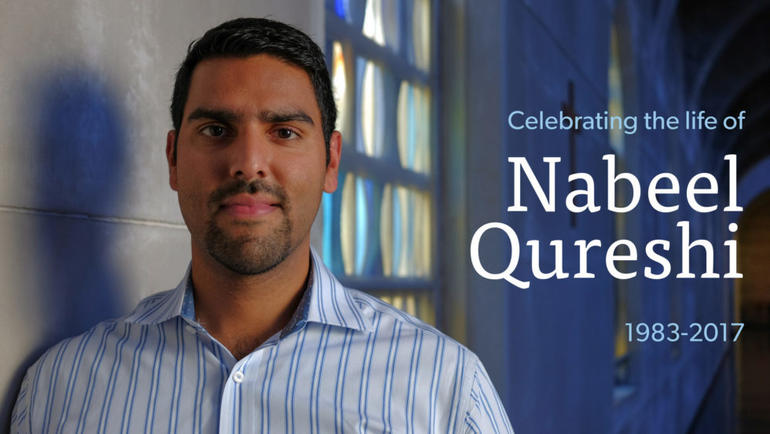 Qureshi converted to Christianity from Islam after engaging in discussions with Christians while at university.

During his health battle Qureshi posted a series of video blogs to Youtube, some from his hospital bed.

An online fundraising page created before Mr Qureshi's death to cover his medical costs has continued to raise donations which have now surpassed £649k. The leftover money will help support his family.