Protests started two weeks ago when the Government announced they would no longer subsidise fuel, causing it to rise dramatically overnight and leaving thousands of Ecuadorians facing financial difficulty.

It was part of an austerity package that aimed to reduce Ecuador's deficit but protests have led to the plan being scrapped, after talks with indigenous communities, encouraged by the UN and the Catholic Church.

In the capital, Quito, schools were closed, shops boarded up and streets blocked with burning tyres.

When people did manage to get to a shop, it has been described as 'mayhem'.

Curfews were introduced, leaving people stuck in their homes without knowing when they would be able to go out and get more supplies. 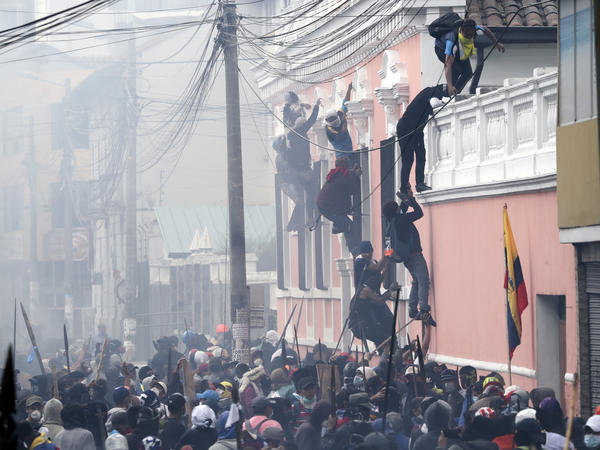 James Freeman, a Christian who lives in Quito with his wife, told Premier he had risked going out and was then locked in a supermarket.

Speaking on Premier's News Hour, Mr Freeman said: "Historically, for about 40 years, subsidies have been in place to basically keep the fuel prices down and over the recent years, particularly last decade, the government have noticed that annually this is something that they couldn't keep up and it's been costing the Ecuadorian government a lot - estimates of around $1 billion annually.

"So it was decided by the current government to withdraw the subsidies through a decree called 883 and subsequently this happened about two weeks ago. So, as a part of that austerity package, the subsidies were taken away and within 24 hours, the petrol prices shot up more than 123%."

He explained that the huge petrol hikes would have had a huge impact on the poorest, who earn around the equivalent of £310 a month, and indigenous communities, who traditionally support the economy, and provide fresh produce and transport.

"In our neighbourhood, the TV station down the road was torched, mobs were basically going around the streets and throwing stones, smashing windows. Some of our very brave neighbours came out and about 40 people decided to create this human wall to stop the mobs coming in.

"There were massive shortages in the supermarkets, things like egg milk, rice, fresh produce made - literally completely empty. So, it was a very scary period for us."

The austerity package has now been withdrawn and a temporary agreement has been reached, with fuel prices returned to what they were before and schools re-opening.

President Lenin Moreno and leaders of Ecuador's indigenous peoples struck a deal late on Sunday to cancel the austerity package after seven people have died in the protests.

James Freeman explained how Christians could pray for Ecuador:

"That basically this new package put together will be one of transparency and honesty and take into account the needs of the indigenous communities, particularly those families from lower income brackets, and more importantly, healing.

"These two weeks have seen the worst violence that we've ever seen in recent decades in terms of the history of Ecuador and it's taken everyone by surprise, and a lot of it's very deeply rooted in these racial divides, unfortunately, that we have in South America,

"We want to pray against those type of divisions and above all for peace to be restored."

He added that a verse Christians could read to pray for would be Romans 14:19: "Let us therefore make every effort to do what leads to peace and to mutual edification."

Sone of my precious Ecuadorians walking several miles to church yesterday. Amidst the turmoil in the country now, the beautiful Ecuadorians are still being faithful to Jesus! ❤️ pic.twitter.com/fjxfTle6PZ