Hundreds of laid-off workers have demonstrated outside a church which received millions of pounds in donations from the Wrightbus manufacturer.

Wrightbus went into administration last week with the loss of 1,200 jobs.

Jeff Wright is a pastor at Green Pastures Church and owns a controlling stake in a company which was one of the UK's main bus builders and supplied the "Boris Bus" red double decker Routemaster when the Prime Minister was London mayor.

Green Pastures is a Christian charity and received £15 million in donations from the Co Antrim firm when it was profitable.

Mr Wright said a lot of former workers were afraid and scared about the future.

He told the congregation at Sunday worship: "They don't know what way to turn, so we must be mindful of that."

He said negotiations to save the company were at a delicate stage.

"I won't jeopardise the future so I can look good."

He received a standing round of applause in the church. 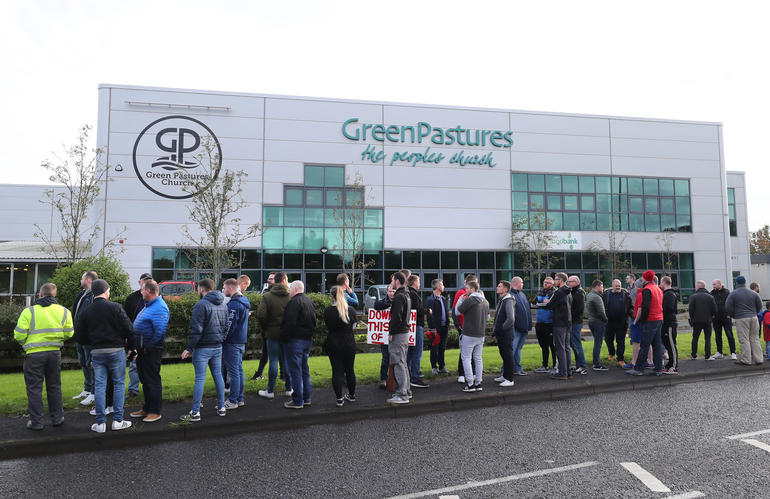 Protesters outside Green Pastures church in Ballymena during a Sunday Service

The decision to spend company dividends on the evangelical church has been criticised by some former workers and some held banners to that effect on Sunday.

Mr Wright said: "I am so sorry that this church has to go through what they went through, I never thought this would happen."

He said he had fought to build Wrightbus into a world-class entity through crisis after crisis and maintained its reputation for quality and integrity.

Mr Wright displayed a photo of the Wright family 60 years ago with a blue bus.

"This picture represents the heart and soul of what it takes to make a good company a great company."

He said "blood, sweat and tears" had made the firm great.

Protesters outside Green Pastures church in Ballymena during a Sunday Service.

His own son, the fourth generation of Wright, had lost his inheritance along with his sisters and their children along with the hundreds of men he had worked, played football and prayed with.

Mr Wright said an evangelical trust held a third of shares in the company.

He disclosed that £20 million of reserves had been spent on the company over the last year in an effort to keep it in operation until a buyer could be found.

After the service, company founder William Wright met some of the men standing outside and said: "I am sorry folks, hopefully everything will work out."

He received a round of applause.

Among those protesting outside was William Wright's granddaughter, Fiona Knowles.

She said: "Our family has been destroyed by this and it could have been avoided.

"It is hard to watch, when you watch your granda who has built this place up since he was 16, to have it destroyed, it is very hard to watch."

She said 3,000 families were affected three months before Christmas.

She added: "I know the hurt and loss and it is the hopelessness that gets you, I wanted to show my support here."

Andrew French from nearby Ahoghill, aged 34, worked at the plant for 18 years.

His father spent 43 years there and his sister was also an employee.

Protesters outside Green Pastures church in Ballymena during a Sunday Service.

He said: "Every single one of us feels let down."

He is married with a 10-month-old baby and a four-year-old.

He asked: "Is Christmas going to have to be cancelled?

"This is all I know, I have been in here since I left school.

"Eighteen years service for what, statutory redundancy which you cannot get for 10 weeks?

"It is an awful situation to be in."